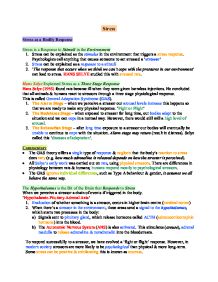 Stress can be explained as the stimulus in the environment that triggers a stress response. Psychologists call anything that causes someone to act stressed a stressor

.Stress. Stress as a Bodily Response Stress is a Response to Stimuli in the Environment 1. Stress can be explained as the stimulus in the environment that triggers a stress response. Psychologists call anything that causes someone to act stressed a 'stressor' 2. Stress can be explained as a response to a stimuli 3. 'The response that occurs when we think we can't cope with the pressures in our environment' can lead to stress. HANS SELYE studied this with stressed rats. Hans Selye Explained Stress as a Three Stage Response Hans Selye (1956) found rats became ill when they were given harmless injections. He concluded that all animals & humans react to stressors through a three stage physiological response. This is called General Adaptation Syndrome (GAS). 1. The Alarm Stage - when we perceive a stressor our arousal levels increase this happens so that we are ready to make any physical response. 'Fight or Flight' 2. The Resistance Stage - when exposed to stressor for long time, out bodies adapt to the situation and we can cope in a normal way. However, there would still will a high level of arousal. 3. The Exhaustion Stage - after long time exposure to a stressor our bodies will eventually be unable to continue to cope with the situation. Alarm stage may return (result in distress). Selye called this 'diseases of adaptation'. Commentary * The GAS theory offers a single type of response & neglects that the body's reaction to stress does vary (e.g. how much adrenaline is released depends on how the stressor is perceived). * All Selye's early work was carried out on rats, using physical stressors. There are differences in physiology between rats & humans; humans respond mostly to psychological stressors. * The GAS ignores individual differences, such as Type A behaviour & gender, it assumes we all behave the same way. The Hypothalamus is the Bit of the Brain that Responds to Stress When we perceive a stressor a chain of events if triggered in the body. ...read more.

Their work was machine-paced, isolated, very repetitive, productivity determined wage rate of entire factory. They were compared with low-risk 10clearners who were self-paced etc. Stress-related hormones in urine were measured on work days & rest days. Findings - 14fishers secreted more stress hormones (adrenaline & noradrenaline) on work days then rest days. They also showed high levels of stress-related illness (such as headaches) then cleaners. Conclusion - Work stressors - especially repetitiveness, machine-pacing, high responsibility, lead to chronic (long-term) physiological arousal. This leads to stress-related illness. Criticism - Individual differences are not controlled, (some people may be vulnerable to stress (Type A are attracted to high-risk demanding jobs)). Stress - Individual Differences Different Personalities Can Lean to Different Stress Levels Type A - Competitive & Ambitious Type X - In between Type B - Non-Competitive, Relaxed, Easy going. FRIEDMAN & ROSENMAN (1974) - 'Type A' Personality & Illness Aim - Links between Type A behaviour & Cardiovascular (heart) disease Procedures - 3,200 California men, 39-59years, categorized as either Type A, Type X or Type B. Followed up for 81/2 years to assess their lifestyle & health outcomes. Findings - By end of study, 257 men developed coronary heat disease (CHD), 70% - Type A Conclusion - Type A behaviour pattern increases vulnerability to heart disease. Behaviour modification programmes can reduce Type A risk of heart disease. Criticism - Other factors such as hardiness could cause problem. Not an experimental study so cause & effect cannot be assumed; other studies failed to show relationship between Type A & heart disease: SHEKELLE et al (1985), found no relationship between 'Type A' behaviour & heart disease, from a 7year study involving 12,000 men. Commentary Only 2 personality types (to simplistic). Later research identified 'Type C' (mild-mannered, easy going, may react to stressful situations), this people have higher risk of cancer. 'Type D' - very negative/pessimistic people who worry too much, these people have higher risk of heart attack. ...read more.

These people have control & can cope with stress well. 3. SULS & MULLEN (1981) found illness was associated with uncontrollable life events than with controllable events. 4. MARMOT (1997) - found, people in jobs with less responsibility showed high risk of cardiovascular disease. These people have low job control. 5. SCHAUBROECK (2001) - found, employees who believed they are responsible for things going wrong at work were more stressed. This suggests greater control isn't always better for some. 6. GLASS & SINGER (1972) - investigated the illusion of control * Investigate whether illness of control can reduce stress. * Participants were deceived into believing they could control a loud noise by pressing a button. There stress response, compared to another group who had no control. There arousal level was measured using the galvanic skin response (GSR), this measures sweating. * The experimental group showed less stress response (lower arousal) than control group. * If people think they are in control (even when they're not), they are less likely to get stressed. Information & Cognitive Control Are Useful Together Information Control - having some knowledge on nature of stress. Cognitive Control - Control over stress through relaxation. Langer et al investigated the effectiveness of these two methods of control. LANGER et al (1975) - Studied the Types of Control * Compare 3groups, who were undergoing non-emergency surgeries, investigating, effectiveness of information & cognitive control. * 1group was given information control (informed about treatment & effect on them, following days). 2nd group was given cognitive control (they were prepared to think positively). 3rd group was not prepared in any way. This served as the comparison group. * The 1st two groups coped far better than the comparison group. * Both informational & cognitive control increase people's ability to cope with stress. For maximum benefit, there is no reason why they should not be used together. Stress Management Techniques Use Cognitive Control Stress management techniques aim to increase cognitive control & minimise the negative effects of stress. A simple method is to say things to yourself that will help you cope with stressful situations. ...read more.