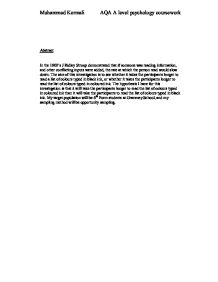 The participant struggled on a few of the colour words since they were not distinctively clear of to which colour it was. Also the participant found it hard to scroll down two different columns on the same A4 paper of the two lists. After the pilot study, a new pair of lists was made with more common colours and each of the lists in one column of the paper. Also a stop watch was used to measure the time taken for each participant to successfully complete the two lists. This was measured in milliseconds at first but either rounded down or up into whole seconds. Procedures: Instructions were given to all the participants. These were standardised to make sure participants did not hear anything incorrect which will affect their understanding. Inaccurate results could occur because of this and can question the validity of the experiment. The full standardised instructions can be seen in (Appendix 2) Different candidates were asked if they wished to participate in the experiment. A briefing was given to explain the study and for any questions to be asked. A consent form was also filled out. Assure the participants that intelligence is not being measured and that the participants can withdraw any time. After completion of the task a debriefing must take place informing the participant about the true nature of the study. The first five participants were selected. They had to name the nouns words first and then the colour words and the other five had to name the colour words first and then the noun words. This made sure counterbalancing was used to minimise order affects. To view the two lists in full (see appendix two). When the stopwatch was ready I asked them to start naming the colour of the ink on both lists. One word at a time was revealed to them and if they named the wrong ink colour then the next word would not be revealed to them until they responded correctly. ...read more.