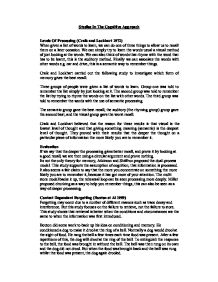 Studies In The Cognitive Approach Levels Of Processing (Craik and Lockhart 1972) When given a list of words to learn, we can do one of three things to allow us to recall them on a later occasion. We can simply try to learn the words usual a visual method of just looking at the words. We can also think of words that rhyme with the word that has to be learnt, this is the auditory method. Finally we can associate the words with other words e.g. car and drive, this is a semantic way to remember things. Craik and Lockhart carried out the following study to investigate which form of memory gives the best recall. Three groups of people were given a list of words to learn. ...read more.

Its not the only theory for memory, Atkinson and Shiffron proposed the dual-process model. This study supports the assumption of cognition, that information is processed. It also seems a fair claim to say that the more you concentrate on something the more likely you are to remember it, because it has got more of your attention. The multi store model backs it up, the rehearsal loop can be seen processing more deeply. Miller proposed chunking as a way to help you remember things, this can also be seen as a way of deeper processing. Context Dependant Forgetting (Bouton et Al 1999) Forgetting may occur due to a number of different reasons such as trace decay and interference. But this study focuses on the failure to retrieve, not the failure to store. ...read more.

From this evidence Bouton et Al could then say that it's not that we forget things, but we don't recall them because the conditions aren't correct. Evaluation Most of the research carried out by Bouton et Al was done on non-human animals and the findings were generalised to humans. The results do show a lot about how the non-human animals thinking works, you can argue that generalising it to humans is not acceptable as we are not non-human animals. The research that was carried out was done in the area of memory and the non-human animal research was carried out in the area of conditioning, so it could be said that these are different cognitive skills, so the two experiments do not back each other up. There are other experiments also carried out based on this theory by many psychologists, which back this up. But its not the only theory for forgetting there is trace decay and also interference. ...read more.