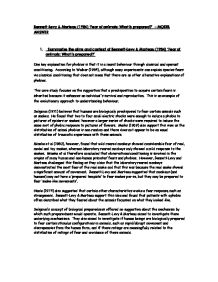 Summarise the aims and context of Bennett-Levy &amp; Marteau (1984) Fear of animals: What is prepared?

Bennett-Levy & Marteau (1984) 'Fear of animals: What is prepared?' - MODEL ANSWER 1. Summarise the aims and context of Bennett-Levy & Marteau (1984) 'Fear of animals: What is prepared?' One key explanation for phobias is that it is a learnt behaviour through classical and operant conditioning. According to Walker (1984), although many experiments can explain species fears via classical conditioning that does not mean that there are no other alternative explanations of phobias. This core study focuses on the suggestion that a predisposition to acquire certain fears is inherited because it enhances an individual's survival and reproduction. This is an example of the evolutionary approach to understanding behaviour. Seligman (1971) believes that humans are biologically predisposed to fear certain animals such as snakes. He found that two to four small electric shocks were enough to induce a phobia to pictures of spiders or snakes; however a larger series of shocks were required to induce the same sort of phobic response to pictures of flowers. Marks (1969) also support this view as the distribution of animal phobias is non-random and there does not appear to be an equal distribution of traumatic experience with these animals. ...read more.

In the ratings for nearness, females were found o be less willing to approach or pick up 10 of the animals than males. These animals included jellyfish, cockroach, ant, moth, crow, worm, beetle, slug, mouse and spider. Similar differences in both males and females were found in the fear ratings. However, there were no notable s*x differences in ratings of ugliness, sliminess, speediness and suddenness of movements (so although men were generally less fearful than women, the characteristics of animals to which they respond appear to be the same). Speediness and suddenness of movements were found to be highly correlated, showing a positive correlation of +0.95. The correlation between nearness and suddenness of movement was +0.05, but when the effect of ugliness was removed this rose to +0.61. Fear, speediness and nearness all showed similar correlations. Bennett-Levy and Marteau also found that all four ratings of the perceptual characteristics were related to both fear and nearness. "The results of this study suggest that the perceptual characteristics of animals are of some importance in determining their positive or negative appraisal by humans." This suggests that what an animal looks like determines how a person judges it. ...read more.

Regan and Howard (1995) conditioned human participants by showing slides of 'fear-relevant' (FR, i.e. Spider) or 'fear-irrelevant' (FI, i.e. Flower) stimuli followed by a white noise. Later, when the noise was played the humans were more likely to demonstrate a fear response when the white noise had been associated with a fear-relevant stimulus as opposed to a fear-irrelevant stimulus. This study can be seen to support Bennett-Levy and Marteau's findings, in that the association was only found for 'fear relevant' stimuli, therefore suggesting that we have an innate predisposition to fear certain animals. If we explain phobias in terms of biological preparedness, then all cultures should be equally scared of certain stimuli, for example, animals that make sudden movements. However, fear of spiders have been shown to be restricted to Europeans and their descendants (Davey, 1994). In many African cultures for example, the spider is seen as a wise creature and where the spider lives is cleaned and protected by local people. McNally reviewed a number of studies and suggested that we develop an expectancy bias against certain relevant stimuli. This is a development of Bennett-Levy and Marteau's study and Davey (1995) further developed this idea by suggesting that we expect that fear relevant stimuli will produce a negative consequence in the future and therefore fear certain animals. Davey's idea suggests that phobias are not explained through evolutionary psychology. ...read more.