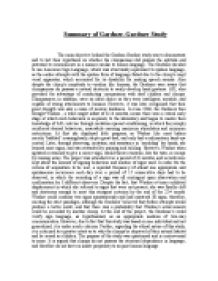 ﻿Summary of Gardner-Gardner Study The main objective behind the Gardner-Gardner study was to demonstrate and to test their hypothesis on whether the chimpanzees did possess the aptitude and potential to communicate in a manner similar to human language. The Gardners decided to use American Sign Language, which was structurally equivalent to spoken language, as the earlier attempts with the spoken form of language failed due to the chimp?s inept vocal apparatus, which accounted for its disability for making speech sounds. Also despite the chimp?s ineptitude to vocalize like humans, the Gardners were aware that chimpanzees do possess a natural dexterity to easily develop hand gestures. ASL also provided the advantage of conducting comparisons with deaf children and chimps. ...read more.

At first she displayed little progress, as Washoe like most babies merely ?babbled? meaninglessly, slept a great deal, and only had a rudimentary hand-eye control. Later, through observing, imitation, and assistance in ?moulding? her hands, she learned more signs, and was rewarded by praising and tickling. However, Washoe when agitated or strained to give a correct sign, would throw a tantrum, bite the tutor, or escape by running away. The project was extended over a period of 32 months, and records were kept about the amount of signing behaviour and number of signs used. In order for the criteria of acquisition to be met, a reported frequency of atleast one appropriate and spontaneous occurrence each day over a period of 15 consecutive days had to be observed, in which the recording of a sign was all contingent upon observation and confirmation by 3 different observers. ...read more.

At the end of the project, the Gardener?s could verify sign language, as hypothesized, as an appropriate medium of two-way communication. However, due to fact that this study was based on one individual and not generalized, it is under much criticism. Further, regarding the ethical nature of this study, it is criticized to a greater extent as to why the chimps be deprived of their natural habitat and be reared as children. The purpose of the study was questioned and is controversial to some. It is argued that chimps do not possess the structural dependence in language, and therefore do not have an innate propensity to acquire human language. ...read more.