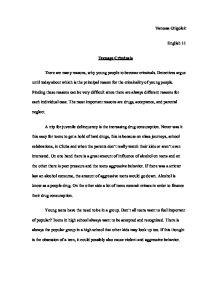 Vanessa Grigoleit English 11 Teenage Criminals There are many reasons, why young people to become criminals. Detectives argue until today about which is the principal reason for the criminality of young people. Finding these reasons can be very difficult since there are always different reasons for each individual case. The most important reasons are drugs, acceptance, and parental neglect. A trip for juvenile delinquency is the increasing drug consumption. Never was it this easy for teens to get a hold of hard drugs, this is because on class journeys, school celebrations, in Clubs and when the parents don't really watch their kids or aren't even interested. On one hand there is a great amount of influence of alcohol on teens and on the other there is peer pressure and the teens aggressive behavior. ...read more.

There is always the popular group in a high school that other kids may look up too. If this thought is the obsession of a teen, it could possibly also cause violent and aggressive behavior. Parental abuse or even family abuse can have a big and long term effect on kids. It shows itself on the basis the numbers that over half (55.6 %) of all children have once already been victims of parental force or abuse. These children will probably build up the same habits of their parents. Children that have not had any parental abuse put apon them usually turn out to be non criminal. It can be derived from known facts that children who were never or easily punished become not so frequent offenders as children who were heavily punished or abused. ...read more.

When parents have a full time job, they won't have time for their kids so that the kids feel neglected. What if kids become bored and build up stupid or violent thoughts? From the day a child is born it needs love. Without this where shall it go and which path in life should it follow? Small children are easily influenced by elders, the "populars," media such as T.V. or computer, or even by their thoughts. Many children face abuse everyday and therefore don't know how to react when similar situations face them but to act the same way. Teens are influenced a lot by drugs and alcohol because they think it is fun. What could that lead to? Many factors and mistakes in life can effect a person for the worse and make a cute 5 year old boy into a 16 year old monster. ...read more.

The writer has made some very good connections between neglect, abuse, poor parenting, media, peer groups and teenage criminality. Now the writer needs to read around this subject and provide in the essay, some statistics, evidence, studies or research which backs up some of the statements made. If evidence is not produced it looks as if the writer has just given their own opinions on the subject.

The writer also needs to plan the writing of the essay better with an introduction to the subject, the main discussion points with evidence and then a brief conclusion. This would improve the essay mark dramatically.