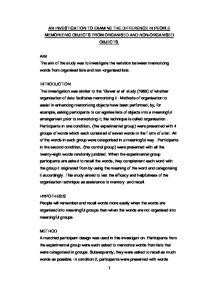 AN INVESTIGATION TO EXAMINE THE DIFFERENCE IN PEOPLE MEMORIZING OBJECTS FROM ORGANISED AND NON-ORGANISED OBJECTS. AIM The aim of the study was to investigate the variation between memorizing words from organised lists and non-organised lists. INTRODUCTION The investigation was similar to the 'Bower et al' study (1969) of whether organisation of data facilitates memorizing it. Methods of organisation to assist in enhancing memorizing objects have been performed, by, for example, asking participants to categorise lists of objects into a meaningful arrangement prior to memorizing it; this technique is called organisation. Participants in one condition, (the experimental group) were presented with 4 groups of words which each consisted of seven words in the form of a list. All of the words in each group were categorised in a meaningful way. Participants in the second condition, (the control group) were presented with all the twenty-eight words randomly jumbled. When the experimental group participants are asked to recall the words, they complement each word with the group it originated from by using the meaning of the word and categorising it accordingly. This study aimed to test the efficacy and helpfulness of the organisation technique as assistance to memory and recall. HYPOTHESIS People will remember and recall words more easily when the words are organised into meaningful groups than when the words are not organised into meaningful groups. METHOD A matched participant design was used in this investigation. Participants from the experimental group were each asked to memorize words from lists that were categorised in groups. Subsequently, they were asked to recall as much words as possible. ...read more.

At the end of these 8 minutes, papers were collected and participants were given a blank piece of paper. They were told to write down as many words as they could recall in a short time of 5 minutes. At the end of this 5 minutes, sheets were collected in two piles; 1 pile consisting of the experimental group and the other consisting of the control group. This was the end of the experiment, so participants were thanked for partaking and debriefed (See Appendix 4) (By having all participants in both groups doing one of two conditions was less time-consuming then having the experimental and control group doing their conditions in different times; it shouldn't have had any effect of the results obtained from the memory tests obtained from the memory tests.) RESULTS Here is a table to show the number of words recalled using the method of organisation and not using the method of organisation. NO. OF WORDS RECALLED OUT OF 28 CONTROL GROUP- PARTICIPANT NUMBER NO. OF WORDS RECALLED OUT OF 28 EXPERIMENTAL GROUP- PARTICIPANT NUMBER 13 9 21 1 7 10 18 2 15 11 17 3 9 12 22 4 12 13 15 5 9 14 19 6 11 15 17 7 8 16 20 8 NO. OF WORDS RECALLED BY CONTROL GROUP NO. OF WORDS RECALLED BY EXPERIMENTAL GROUP 84 149 TOTAL 10.5 18.625 MEAN 10 18.5 MEDIAN 9 17 MODE A graphic representation in the form of a bar chart has been interpreted from the central tendency figures in the table above. ...read more.

A 30 second break will be given once all words are read out, and I shall then ask you to write down as much words as you can recall in a period of 5 minutes" Standardised Instructions 2 "This time I am going to give you all a memory test which will help me with my investigation. As I have allocated you in to 2 conditions, each participant from 1 group will get 1 paper different from the other groups' paper of words. From this I shall give you 8 minutes to learn in your mind as much words as possible. After 8 minutes is up, I will give you a minute break. Subsequently you will be told to write as many words as you can recall, in only 5 minutes. This experiment will need to be conducted in silence, so recalling of words should be done in the head and not muttered out. Does everybody understand?" APPENDIX 4 Debriefing "This was an experiment designed to discover whether it is easier to remember words when the words are organised in to groups that belong to different things. By organising words in such a way, it is one of many ways of facilitating retrieval. All results achieved showed normal memory spans. I would like to reassure you once again that all results will be confidential and anonymous. Then again, if anyone would like to be acknowledgeable and aware of their individual result that they achieved, I will be more then happy to inform anyone. Thank you very much for your help which was entirely voluntary on your behalf." (To ensure the study was ethically acceptable and valid, all participants were debriefed) APPENDIX 5 ?? ?? ?? ?? 1 ...read more.