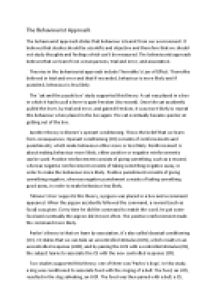 The behaviourist approach states that behaviour is learnt from our environment. It believes that studies should be scientific and objective

﻿The Behaviourist Approach The behaviourist approach states that behaviour is learnt from our environment. It believes that studies should be scientific and objective and therefore that we should not study thoughts and feelings which can?t be measured. The behaviourist approach believes that we learn from consequences, trial and error, and association. Theories in the behaviourist approach include Thorndike?s Law of Effect. Thorndike believed in trial and error and that if rewarded, behaviour is more likely and if punished, behaviour is less likely. The ?cat and the puzzle box? study supported this theory. A cat was placed in a box in which it had to pull a lever to gain freedom (its reward). Once the cat accidently pulled the lever, by trial and error, and gained freedom, it was more likely to repeat this behaviour when placed in the box again. The cat eventually became quicker at getting out of the box. Another theory is Skinner?s operant conditioning. ...read more.

The animals used in studies such as ?Skinner?s box? and ?the cat in the puzzle box? were confined in small spaces and maybe distressed. They weren?t protected from harm, which is unethical. Studies carried out in the behaviourist approach were either on animals or a child. Although the studies provided evidence for the theories, the behaviour of animals may not apply to that of humans, and the results of a study on a child won?t be necessarily be the same as they would be if carried out on adults. We can?t generalise from animals to humans, or children to adults. The behaviourist approach fails to take into account thoughts and feelings, and therefore ignores cognitive approaches. It also fails to take into account the effect of genetics and instead states that behaviour is learnt from our environment. This doesn?t explain how people can learn from the experiences of others, or explain spontaneous behaviour. The behaviourist approach contrasts with the humanistic approach as it believes that behaviour is determined by our environment, not the humanistic view of free will. ...read more.