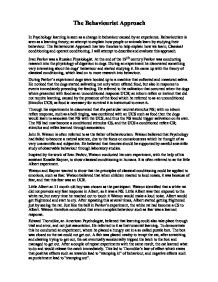 The Behaviourist Approach In Psychology learning is seen as a change in behaviour caused by an experience. Behaviourism is seen as a learning theory; an attempt to explain how people or animals learn by studying their behaviour. The Behaviourist Approach has two theories to help explain how we learn; Classical conditioning and operant conditioning. I will attempt to describe and evaluate this approach. Ivan Pavlov was a Russian Physiologist. At the end of the 19th century Pavlov was conducting research into the physiology of digestion in dogs. During an experiment he discovered something very interesting about the dogs' behaviour and started studying it. He came up with the theory of classical conditioning, which lead on to more research into behaviour. During Pavlov's experiment dogs were hooked up to a machine that collected and measured saliva. He noticed that the dogs started salivating not only when offered food, but also in response to events immediately preceding the feeding. He referred to the salivation that occurred when the dogs where presented with food as an unconditioned response UCR; an inborn reflex or instinct that did not require learning, caused by the presence of the food which he referred to as an unconditioned Stimulus UCS; as food is necessary for survival it is instinctual to crave it. ...read more.

Watson therefore concluded that even complex behaviour such as fear was a learned response. Edward Thorndike, an American Psychologist, believed that learning could also take place through trial and error, and not just association. He referred to it as Instrumental learning. To demonstrate this he conducted an experiment, where he placed a hungry cat in a so called puzzle box. The box was closed so the cat could not get out. A fish was placed nearby to tempt the cat, after scratching and clawing trying to get out, the cat eventually accidentally tripped the latch to the box and managed to get out. After a couple of repeat experiments with the same result, the cat learned what to do and would release the catch immediately. This led to Thorndike's law of effect which states that positive effects such as rewards lead to "stamping in" of behaviour, and negative effects such as punishment lead to "stamping out". This theory was further developed by Psychologist B. F. Skinner into operant conditioning. While Pavlov's classical conditioning focused on a stimulus resulting in certain behaviour, like Thorndike, Skinner concentrated on the effect of behaviour. ...read more.

Although there are limitations these approaches still have their uses today. Classical conditioning has been used to treat alcoholism by connecting unpleasant reflexes to unacceptable behaviour. Operant conditioning especially is still widely used, even in unexpected places, Store card reward schemes for example use a form of operant conditioning. The customer buys something and receives either a voucher or points to use towards a purchase at a later date; this is a positive reinforcement to encourage the customer to repeat his behaviour i.e. return to the store. Another example is in dealing with children with behavioural issues, where positive reinforcement and negative punishment is often used to teach better behaviour. Although the Behaviourist approach has some limitations, as mentioned above, it still has its uses in treating disorders and explaining certain behaviours in people. Although it doesn't take into account the complexity of human thought processes, it can be applied to people in certain situations. As the little Albert experiment showed people can learn to associate a stimulus to a response, which explain why certain people have phobias, and possibly also help cure them of it. This Approach would probably be better if used in conjunction with other approaches where valuable information could be gained from each and combined to form a bigger picture. ...read more.