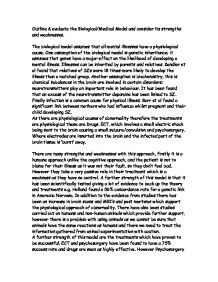 Outline & evaluate the Biological/Medical Model and consider its strengths and weaknesses. The biological model assumes that all mental illnesses have a physiological cause. One assumption of the biological model is genetic inheritance; it assumes that genes have a major effect on the likelihood of developing a mental illness. Illnesses can be inherited by parents and relatives. Kendler et al found that relatives of SZs were 18 times more likely to develop the illness than a matched group. Another assumption is biochemistry, this is chemical imbalances in the brain are involved in certain disorders; neurotransmitters play an important role in behaviour. ...read more.

Where electrodes are inserted into the brain and the infected part of the brain tissue is 'burnt' away. There are many strengths and weaknesses with this approach, firstly it is a humane approach unlike the cognitive approach, and the patient is not to blame for their illness as it was not their fault, so they don't feel bad. However they take a very passive role in their treatment which is a weakness as they have no control. A further strength of this model is that it has been scientifically tested giving a lot of evidence to back up the theory and treatments e.g. ...read more.

A further strength of this model are the treatments which have proven to be successful, ECT and psychosurgery have been found to have a 75% success rate and drugs are seen as highly effective. However Psychosurgery is irreversible and ECT by some ahs been considered to be barbaric. Also although drugs treat the symptoms and are easy to administer and cost effective there are problems with side-effects, and issues of addiction and dependency. Additional weakness is that critics have argued that it a reductionist approach; it focuses on biological/physiological causes of abnormal behaviour and ignores the social, cultural and emotional aspects of behaviour therefore ignoring the complexities of human behaviour. However the biological approach was one of the first approaches in use and is widely and highly regarded in the west and still continues to influence us today. ...read more.

The candidate makes a good effort here. The answer discusses studies in a sufficient level of detail and also demonstrates good analytical skills with regarding to evaluating psychology. There is a very close and succinct appreciation of the question, and ...

The candidate makes a good effort here. The answer discusses studies in a sufficient level of detail and also demonstrates good analytical skills with regarding to evaluating psychology. There is a very close and succinct appreciation of the question, and all efforts in the answer are appropriately dissipated on the subject of biological explanations for disorders and the strengths/weakness this model presents.

The structure needs a little work, particularly the introduction and conclusion. An introductory paragraph should not contain any evaluation or even that much detailed description of psychological studies. Not that there is anything really wrong with doing things like this, but it does make the information easier to digest due to a more familiar and conventional essay structure which separates analysis from the 'bookends' of the essay. I recommend possibly re-writing these two paragraphs and ensuring that they are clearly set away from the bulk of the analysis.

The Level of Analysis is good, if a little prescriptive (which can sometimes be expected with Psychology essay). There is a balanced discussion which gives insight and indication of a very adept knowledge of psychological evidence and how to analyse it. I would love to see more range in the analytical points used by the candidate, as it'd show the examiner a much broader knowledge of a very wide profession. Other than that, the answer is perfect and the candidate can expect to achieve a mid-high B grade for A Level.

The Quality of Written Communication is one of the reason this candidate does not make the A grade boundary. It is simply unacceptable at A Level standard to see some of the mistakes made here "Where electrodes are inserted into the brain and the infected part of the brain tissue is 'burnt' away." standing as a lone sentence is poor grammar and must be rectified. It seems small, but the frequency at which these errors are made makes them a bigger issues which must be addressed.