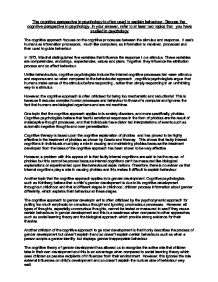 The cognitive perspective in psychology is often used to explain behaviour. Discuss the cognitive perspective in psychology. In your answer, refer to at least two topics that you have studied in psychology The cognitive approach focuses on the cognitive processes between the stimulus and response. It see's humans as information processors, much like computers, as information is received, processed and then used to guide behaviour. In 1973, Mischel distinguished five variables that influence the response to a stimulus. These variables are competencies, encodings, expectancies, values and plans. Together, they influence the attribution process and so affect behaviour. Unlike behaviourists, cognitive psychologists include the internal cognitive processes between stimulus and response and so when compared to the behaviourist approach, cognitive psychologists argue that humans make sense of the stimulus before responding, rather than simply responding in an unthinking way to a stimulus. ...read more.

development and this is a weakness when compared to other approaches such as social learning theory and the biological approach which provide strong evidence for their theories. Another criticism of the cognitive approach to gender development is that it only describes the process of gender development but doesn't explain it and so doesn't explain certain behaviours such as when a person adopts a gender identity but displays gender inappropriate behaviour. The cognitive theory of gender development has allowed us to recognize the active role that children take in their own development and this is an advantage when compared to social learning theory which sees children as passive recipients of influences from their environment. However, this ignores the role external influences on child's development and so doesn't explain the nurture side of behaviour very well. ?? ?? ?? ?? ...read more.

This is easily a 5 star essay. The candidate talks at length and with great confidence about the cognitive approach and makes a well-augmented analysis about it's practise and the limitations that it can be criticised with. There is a ...

This is easily a 5 star essay. The candidate talks at length and with great confidence about the cognitive approach and makes a well-augmented analysis about it's practise and the limitations that it can be criticised with. There is a balanced discussion about the approach, and plenty of evidence of a deep-set understanding about the principles of the approach. The discussion has limitations and strengths which are excellently explained with plenty of psychological terminology, showing the examiner the proficiency with which the candidate can both write an essay and construct a good analysis of the cognitive approach with all the appropriate vocabulary.

The Level of Analysis here is excellent. The candidate has constructed a balanced discussion about the cognitive approach, explaining in great detail the assumptions of the approach, how it differs from the behaviourist perspective and the psychodynamic perspective (the comparative points are excellent as they show the examiner the candidate possesses a wide knowledge about psychology), and also citing research evidence that supports and refutes the theories, whilst also concerning practical issues such as the reductionist and mechanistic tendencies of the cognitive approach. All this is excellently structured to ensure clarity in the conveyance of information, so much so that ev en those not familiar with the psychological approach could understand the essay.

The Quality of Written Communication (QWC) is very good. As well as from an English perspective, the psychology-based QWC is excellent too. There are no issues with grammar, spelling and punctuation and the use of psychology-based vocabulary such as "maladaptive thought processes" is proficient and confident; this would show the examiner that the candidate's knowledge of psychology is both varied and deep.