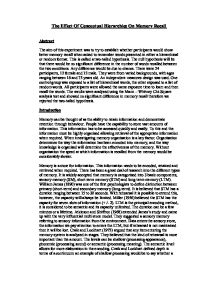 The Effect Of Conceptual Hierarchies On Memory Recall

The Effect Of Conceptual Hierarchies On Memory Recall Abstract The aim of this experiment was to try to establish whether participants would show better memory recall when asked to remember words presented in either a hierarchical or random format. This is called a two-tailed hypothesis. The null hypothesis will be that there would be no significant difference in the number of words recalled between the two conditions. Any difference would be due to chance. There were 24 participants, 12 female and 12 male. They were from varied backgrounds, with ages ranging between 16 and 75 years old. An independent measures design was used. One control group was exposed to a list of hierarchical words, the other exposed to a list of random words. All participants were allowed the same exposure time to learn and then recall the words. The results were analysed using the Mann - Whitney Chi-Square analysis test and showed no significant difference in memory recall therefore we rejected the two-tailed hypothesis. Introduction Memory can be thought of as the ability to retain information and demonstrate retention through behaviour. People have the capability to store vast amounts of information. This information has to be accessed quickly and easily. To this end the information must be highly organised allowing retrieval of the appropriate information when required. When investigating memory organisation is a key factor. Organisation determines the way the information has been encoded into memory, and the way knowledge is organised will determine the effectiveness of the memory. Without organisation the speed at which information is recalled from the memory would be considerably slower. Memory is a store for information. ...read more.

The second participant would be the alternate. Once the stimulus list was established for each participant the methodology would be the same. In the controlled environment of a quiet room the participant was briefed as to the form of the trial. The following instruction brief was read to the participants and then the trial conducted as prescribed in the brief. " This is a two trial experiment. During each trial you will be given the same sheet of words, which you should try and learn. You will be given 60 seconds to study the sheet, it will then be removed and you will be given a sheet of paper on which to write down as many words as you can in any order. You will then have 2 minutes in which to recall the words. You will then be presented with the sheet of words again and have another 60 seconds to study them. The words will be taken away and you will have a further 2 minutes in which to write down the words." The time for exposure to the stimulus sheet and recall there-of was monitored and controlled using a stopwatch. When all 12 experimenters had conducted their trials the results were pooled for analysis. De-brief The participants were thanked and told their score. It was carefully explained that their results were confidential and would be kept anonymous. Table Showing Relationship Between The Randomised - List Performance and The Hierarchical - List Performance Recall Mean Out Of 22 Words Randomised List Hierarchical List Participants 7 6.5 17.5 13 9 17.5 12 16 9.5 13 14.5 16.5 8 8.5 14.5 13.5 11.5 14 10 10 14.5 20.5 15 16 TOTAL MEAN 12 13.75 RESULTS The probability level of the results was analysed using the Mann Whitney test. ...read more.

Consequently another idea was developed which is known as the schema theory. This is based on the idea that knowledge is stored in the memory organised in a set of schemas. Each incorporates all the knowledge of a given type of object or event that we have acquired from past experience. They are linked together into related sets organized hierarchically. Schank and Abelson (1977) proposed people have scripts that are used in our comprehension of everyday events. Scripts represent knowledge about complex event sequences. They can be broken up into hierarchical organised scripts and subscripts. This again could show why our results are weak because if the participants have not acquired knowledge from a past experience in reference to countries there will be poor memory recall. Memory is key to how we function and interact with our environment and those around us. Research into memory development is an important field. We are constantly bombarded with information and if we can learn to retain this information and recall efficiently then it would enhance us all. One day technological advances may allow us to see into the brain. A system may be developed to decode the millions of tiny electrical impulses that flash around our heads and reveal more to us than we were previously aware. However as technology advances the need to retain information is being taken away from us. Everything we need to know is just the click of a button away. Computers are everywhere and accessing information is becoming easier all the time. Some people don't even know their friend's telephone numbers any more. It's just scroll to name and dial. It is important that we don't let this over reliance on technology to take over one of the primary functions of our minds therefore a balance needs to be kept to maintain a healthy and active mind. ...read more.