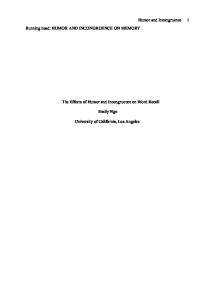 The Effects of Humor and Incongruence on Word Recall

Running head: HUMOR AND INCONGRUENCE ON MEMORY The Effects of Humor and Incongruence on Word Recall Emily Ngo University of California, Los Angeles Abstract Using in a two-way within-subjects design, the effects of humor and incongruence have on memory was investigated. Participants saw a slideshow with either humorous or nonhumorous sentences that was paired with either matching or nonmatching pictures. The number of italicized words correctly recalled was used to measure memory. Due to limitations within my experiment, there was no significant main effect of the type of sentences, no main effect of the type of image and no significant interaction found at the significant level p<.05. With certain modifications, future research can replicate this experiment and probably find significant data that will enhance the understanding of how these stimuli affect memory processes. Such information will be beneficial for real-world applications. The Effects of Humor and Incongruence on Word Recall Memory is important in almost every aspect of life. Many studies have tried to identify and understand the ways in which different types of stimuli affect memory processes. Results from Schmidt (1994) showed that humorous sentences were consistently recalled higher than nonhumorous sentences. Participants were asked to rate the humor intensity of sentences. Schmidt manipulated the type of sentences by randomly presenting both humorous and nonhumorous sentences to participants. To measure memory, participants were asked to write down as many words in the sentences that they have seen as they can. The results revealed that the more humorous the participants found the words to be, the more likely subjects were to remember the words. Schidmt explained that the due to the distinct and incongruous nature of humorous sentences, participants gave more attention to the details of the sentences leading to a higher long-term retention of words compare to those that were in nonhumorous sentences, leading to higher word recall. Hastie and Kumar (1979) ...read more.

If the type of image will be repeated as the operation definition for humor, images that are meant to match words should undergo separate test to ensure their similarities to the words. For the operational definition of memory, researchers should contemplate adopting a free word recall where the main ideas or the any words in sentences can be recalled as oppose to restricting recall to italicized words of the sentence. Schmidt, Hastie and Kumar, and Houston et al. have used this type scoring and operation definition for memory and found significant results. Unlike my experiment, at least two experimenters should score the results and together reach an inter-rater agreement to avoid bias in scoring the data. Finally a double-blind experiment should be used where neither the participants nor experimenters can predict what condition the results are coming from. My purpose of my experiment was the find the effects that humor and incongruence have on memory. I did not find any significant main effect or interaction between the two variables due to the limitations of my experiment. However, I am confident if future research were to replicate my research with my suggested modification in methodology, significant results will be obtained that will help us gain great insights on how these two stimuli influence memory. A good understanding of these processes will enable psychologists to construct experiments and to make predictions of ways to use these stimuli to enhance recall in the real world (e.g., education, advertisement, personal identity). Understanding the ways emotional stimuli affect retention of education materials can help the school system develop a more effective way to teach students important information. For businesses, understanding how memories are preserved can help advertisers create powerful advertisements to catch consumers. Personal memory is important for shaping our attitudes and perceptions the world so with a better knowledge of how memory are formed and sustain, people can live a more fulfilling life. ...read more.