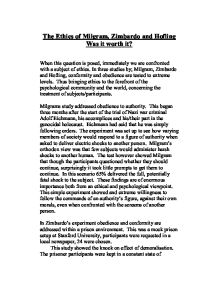 The Ethics of Milgram, Zimbardo and Hofling. Was it worth it?

The Ethics of Milgram, Zimbardo and Hofling Was it worth it? When this question is posed, immediately we are confronted with a subject of ethics. In three studies by; Milgram, Zimbardo and Hofling, conformity and obedience are tested to extreme levels. Thus bringing ethics to the forefront of the psychological community and the world, concerning the treatment of subjects/participants. Milgrams study addressed obedience to authority. This began three months after the start of the trial of n**i war criminal Adolf Eichmann, his accomplices and his/their part in the genocidal holocaust. Eichmann had said that he was simply following orders. The experiment was set up to see how varying members of society would respond to a figure of authority when asked to deliver electric shocks to another person. Milgram's orthodox view was that few subjects would administer harsh shocks to another human. The test however showed Milgram that though the participants questioned whether they should continue, surprisingly it took little prompts to get them to continue. In this scenario 65% delivered the full, potentially fatal shock to the subject. These findings are of enormous importance both from an ethical and psychological viewpoint. This simple experiment showed and extreme willingness to follow the commands of an authority's figure, against their own morals, even when confronted with the screams of another person. ...read more.

The next day the family and friends of the inmates arrived to visit them, the experimenters became concerned that the extreme conditions, if witnessed by the family and friends would possibly effect the continuation of the experiment. So they cleaned and fed the inmates, played music through a speaker system, had a cheerleader greet the awaiting visitors. The visitor's mood was good, as they saw the whole thing as a bit of fun, in this way the experimenters systematically brought the visitors behaviour under situational control. Though the parents complained about the arbitrary rules they complied like good middle class citizens trusting implicitly the words of educated men of medicine. When the parents were reunited with their children they were shocked to see how drawn and fatigued they seemed to be, when this was raised, the experimenter simply used reverse psychology on a typical American family, by challenging the strength of their child's resolve and in turn challenging their parenting skills. These methods paid off, and the parents didn't want to waste anymore of the experimenter's times and left. Ethically this was a poor decision as the parents weren't part of the experiment, but were used without thought to how they may react or feel when they would eventually find out that they had been party to a hoax and that their children were actually being treated badly. ...read more.

The drug was a placebo, not that the nurses knew this. The drugs were clearly labelled with a warning not to exceed the dosage of ten milligrams however the doctor had instructed the nurses on the telephone to give each patient twenty milligrams. Twenty one out of twenty two nurses complied without question. Ethically this could lead to the nurses questioning their ability to care for others and that if they had made this mistake what had they done in the past. The positive's are that the nurses have been confronted with their issues over blind trust and that an important lesson has been learnt. In the case of Milgram, ethics are down to him as an individual as he was a pioneer in social psychological experimentation and free from restrictions as ethical guidelines had yet to be established. Zimbardos theory was sound unfortunately human nature got in the way and his role was lost, making a mockery of the experiment, not that positives can not be drawn from this. Ethically, though guidelines had started to be implemented into psychological experiments ethics were not taken into consideration enough. In Hoflings experiment the ethical practice is flawed but considerably better on the participants, but in comparison to Zimbardos study conformity to authoritative figure is shown yet again. All three experiments were necessary to the psychological community as ethics were highlighted and conditions for participants would only get better. ...read more.