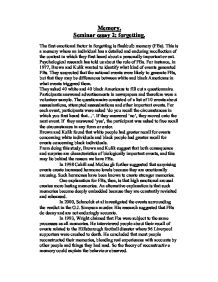 The first emotional factor in forgetting is flashbulb memory (FBs)

Memory. Seminar essay 2: forgetting. The first emotional factor in forgetting is flashbulb memory (FBs). This is a memory where an individual has a detailed and enduring recollection of the context in which they first heard about a personally important event. Psychological research has told us about the role of FBs. For instance, in 1977, Brown and Kulik wanted to identify what kind of events generated FBs. They suspected that the national events were likely to generate FBs, but that they may be differences between white and black Americans in what events triggered them. They asked 40 white and 40 black Americans to fill out a questionnaire. Participants answered advertisements in newspapers and therefore were a volunteer sample. The questionnaire consisted of a list of 10 events about assassinations, attempted assassinations and other important events. ...read more.

In 2000, Schmolck et al investigated the events surrounding the verdict in the O.J. Simpson murder. His research suggested that FBs do decay and are not enduringly accurate. In 1993, Wright claimed that Fbs were subject to the same processes as all memories. He interviewed people about their recall of events related to the Hillsborough football disaster where 96 Liverpool supporters were crushed to death. He concluded that most people reconstructed their memories, blending real experiences with accounts by other people and things they had read. So the theory of reconstructive memory could explain the behaviour observed. The second emotional factor in forgetting is repression, an idea that was first proposed by Freud. In his theory of repression the mind automatically casts out traumatic events from memory to prevent the anxiety that they may cause. A repressed memory is placed beyond conscious awareness and into the unconscious mind. ...read more.

As for evidence against, a review of 60 years of experimental tests of repression (Holmes 1990), led to the conclusion that there is no evidence that clearly supports the role of repression in forgetting. The syndrome of Post-Traumatic Stress Disorder (PTSD) shows that confirmable traumatic events leave trauma victims haunted by intrusive memories in which the victim relives the trauma, rather than being repressed into the unconscious mind. A few studies, including one where children were interviewed after a sniper had attacked their school, showed that even children who were not present at the time of the attack still had clear memories of the event. These 'false' memories were apparently created due to the exposure to the stories of others who were there. I can conclude that most of the information above suggests that FBs and repression do exist as emotional factors in forgetting. Although there is some evidence against the role of repression in forgetting, the evidence for the role of repression is strong and plausible. ?? ?? ?? ?? ...read more.