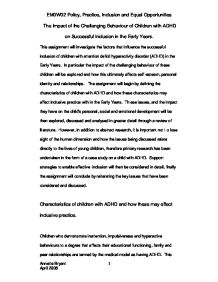 The Inclusion of Children with ADHA in Early Years Settings

This assignment will investigate the factors that influence the successful inclusion of children with attention deficit hyperactivity disorder (ADHD) in the Early Years. In particular the impact of the challenging behaviour of these children will be explored and how this ultimately affects self-esteem, personal identity and relationships. The assignment will begin by defining the characteristics of children with ADHD and how these characteristics may affect inclusive practice with in the Early Years. These issues, and the impact they have on the child's personal, social and emotional development will be then explored, discussed and analysed in greater detail through a review of literature. However, in addition to abstract research, it is important not to lose sight of the human dimension and how the issues being discussed relate directly to the lives of young children, therefore primary research has been undertaken in the form of a case study on a child with ADHD. Support strategies to enable effective inclusion will then be considered in detail, finally the assignment will conclude by reiterating the key issues that have been considered and discussed. Characteristics of children with ADHD and how these may effect inclusive practice. Children who demonstrate inattention, impulsiveness and hyperactive behaviours to a degree that affects their educational functioning, family and peer relationships are termed by the medical model as having ADHD. This was defined as a diagnosis by the American Psychiatric Association (APA 1994) The APA further divides the diagnosis into three sub-types; the mainly hyperactive and, or impulsive sub-type, the mainly inattentive sub-type and the combined sub-type of hyperactive/impulsive/inattentive. In addition Archibald (2006) ...read more.

early age are expected to internalise and behave in accordance with a set of rules that derive from constraints imposed by a teacher-centred, curriculum-focused method of teaching pupils in age related groups." (Cooper 2005,p.128) Cooper also suggests that inappropriate teacher/child ratios may create social disorder problems that are met by a set of lineal rules, designed to regulate peer interaction and movement around school. Concluding that the majority of problems arise from an externally imposed age determined curricula as apposed to a negotiated curriculum. These findings are alarming when considering recent developments, legislation and guidance relating to children with SEN and may indicate that the behaviour aspect of children with ADHD is being used as a scapegoat strategy for settings who are not meeting the needs of these children. When examining the issues surrounding ADHD it is clear that successful inclusion both in the Early Years and Primary school settings is problematic. On the one hand a play-based curriculum is the most suitable form of learning for the majority of young children and is endorsed in Early Years Settings, whilst on the other the symptoms that children with ADHD display suggest that such a curriculum would exasperate these symptoms. However, as previously discussed, some aspects of a play-based curriculum are preferable to the more formal approach of primary school. The PLA (2001) suggest once children have been admitted to the setting, an environment that is created should be one that encourages all children to flourish. Furthermore, Kewley (2001, p6) states the inclusion of children with ADHD is a "moral imperative", however, Farrell and Polat (2003) ...read more.

Visser and Stokes (2003) back this up by arguing that the use of remedial groups, which encourages segregation, is a form of internal exclusion. This may imply that teachers who are inadequately trained and experienced in addressing and managing the behavioural implications and needs of these children use this as a coping strategy rather than confronting the needs of these children head on. Since the Warnock report (DES 1978) there has been emphasis on looking at the curriculum and the environment, rather than within the child for the problem, moving away from a medical model to a social model, this shift has done wonders in addressing equality issues and in developing an inclusive outlook, not just within the education system but in society as a whole. However, the forgoing appears to recognise the problem as totally within the child. Placing the child in such a ridged social framework, that expects the child to conform, as discussed above can only succeed in making the child feel inadequate, different and unable to succeed. Given the evidence that many children with ADHD have further complications of a social and emotional nature, such a framework would further damage this central area of development. Kewley (1999 p.152) stresses, "Many behaviours associated with ADHD may have a significant impact on the child's self-esteem. Protecting it and enhancing it through the school years is a crucial goal of effective management." Further support is now extremely accessible, the Quality Curriculum Authority (QCA) provides a range of supporting materials and guidance for inclusion, these include dedicated web pages, up-to-date reports and resources such as ' Supporting School Improvement: emotional and behavioural development (2001). ...read more.