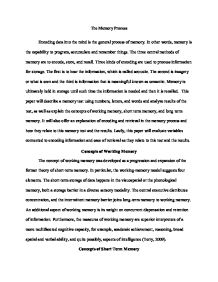 The Memory Process. This paper will describe a memory test using numbers, letters, and words and analyze results of the test, as well as explain the concepts of working memory, short term memory, and long term memory.

The Memory Process Encoding data into the mind is the general process of memory. In other words, memory is the capability to program, accumulate and remember things. The three central methods of memory are to encode, store, and recall. Three kinds of encoding are used to process information for storage. The first is to hear the information, which is called acoustic. The second is imagery or what is seen and the third is information that is meaningful known as semantic. Memory is ultimately held in storage until such time the information is needed and then it is recalled. This paper will describe a memory test using numbers, letters, and words and analyze results of the test, as well as explain the concepts of working memory, short term memory, and long term memory. It will also offer an explanation of encoding and retrieval in the memory process and how they relate to this memory test and the results. Lastly, this paper will evaluate variables connected to encoding information and ease of retrieval as they relate to this test and the results. ...read more.

Long term memory is concerned with the information that lies outside of the conscious mind that may be recalled by the working memory when needed. Although some of the information is easily recalled, while other information is more difficult to recover. Selected Memory Test I found a memory test that used random numbers, random letters, and words to test memory. The website stated that "the average person's short-term memory can hold about 7 pieces of information" (Braingle, 1999-2012). The purpose of this test is to determine my short term memory limit. The website gives information on how to use different techniques to train your brain to better remember more information in the short term memory. One such technique is known as chunking. With this technique you take smaller objects and group them into larger objects so they can be more easily remembered (Braingle, 1999-2012). The test itself began by clicking a button to reveal three numbers or letters, depending on which test you are taking. I chose to do the letters test. ...read more.

I pictured them in my mind as such: XDO-KLJ-NWQ-N-F. I did the last one like that because I remembered it as "enough" or N-F. After taking the letters test, I began thinking of how well chunking works with numbers. We use this with social security numbers as well as telephone numbers and even birthdays. If a familiar number like a birthday is seen as an address, it will be easier to remember the address because those particular numbers are common even though the place may not be. Conclusion In sum, short term and long term memory are thought to have a different set of characteristics, which are unique. Short term memory is as simple as its name, short. It only lasts for up to 30 seconds without rehearsal. With rehearsal, these items have a greater possibility of being transferred to long term memory, which last much longer. Short term memory has a restricted capacity, while long term memory is likely to be nearly immeasurable in volume. On average, people have the capacity to store 7 pieces of information in their short term memory and in their long term memory it is possible to store several groups of information. ...read more.

The writer has completed a basic essay on memory showing that they have an understanding of short term, working and long term memory. However, too few references have been used and therefore some of the main studies associated with these subjects have not been mentioned. More needs to be written on long term memory and recall too. If further studies are included and more is written on the subject of long term memory then the score would be higher.