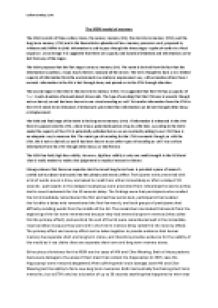 The MSM model of memory

﻿Callum Dunlop 12P3 The MSM model of memory The MSM consists of three unitary stores, the sensory memory (SM), the short-term memory (STM), and the long-term memory (LTM) and is the theoretical explanation of how memory processes work, proposed by Atkinson and Shiffrin in 1968. Information is said to pass through the three stages I spoke of earlier in a fixed sequence. At each stage it is suggested that there are capacity and duration limitations and information can be lost from any of the stages. The MSM proposes that the first stage is sensory memory (SM). The name is derived from the fact that the information is auditory, visual, touch, feel ect, basically all the senses. The SM is thought to have a very limited capacity of information from the environment in a relatively unprocessed way, with a duration of less than 2 seconds. Information in the SM is lost through decay and passed on to the STM through attention. The second stage in the MSM is the short-term memory (STM). ...read more.

The findings were that participants who recalled the list immediately remembered the first and last few words best, participants that recalled the list after a delay only remembered the first few words, and both groups of participants had difficulty recalling words from the middle of the list. The researchers concluded that words from the beginning of the list were remembered because they had entered long term memory (they called this the primacy effect), and words at the end of the list were remembered well in the immediate recall condition because they were still in short term memory (they called this the recency effect). The primacy effect and recency effect can be taken together to provide evidence that human memory has separate short and long term stores, and therefore provides evidence for the validity of the model as it too claims there are separate short term and long term memory stores. Other piece of evidence for the MSM are the cases of HM and Clive Wearing. Both of these patients had severe damage to the areas of their brain that contain the hippocampi (in HM?s case the Hippocampi were removed altogether) ...read more.

Therefore the idea of each unitary store being a passive warehouse can simply not be the case as HM clearly retained some long-term memories when he should have lost all of them. Also HM, though unable to make new long-term memories could learn new skills, one example of this was the pursuit rotor task in which he simply had to use a pencil to follow a wavering line on a rotating disc. Each time he was asked to repeat the task he was unable to remember ever having seen the disc before, but on each occasion he became more accurate through practice. HM had therefore learned a new skill, which must be stored in long term memory, and so the idea that long term memory is a single unitary store as represented by the multi store model must be incorrect; there must be more than one type of long term memory. Overall a huge criticism of the MSM is that it is too reductionist to explain the complexities and this is supported by the cases I have already gone over. ...read more.