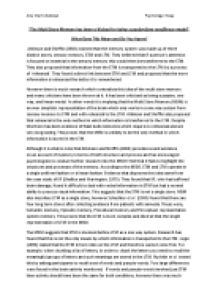 The Multi Store Memory has been criticised for being a passive/one way/linear model, what does this mean and do you agree?

﻿Amy Van Schalkwyk Psychology: Essay ?The Multi Store Memory has been criticised for being a passive/one way/linear model? What Does This Mean and Do You Agree? Atkinson and Shirffin (1968) claimed that the memory system was made up of three distinct stores, sensory memory, STM and LTM. They believed that if a person?s attention is focused on material in the sensory memory this would then be transferred to the STM. They also proposed that information from the STM is transported to the LTM by a process of ?rehearsal?. They found a direct link between STM and LTM and proposed that the more information is rehearsed the better it is remembered. ...read more.

Although it is vital to note that Atkinson and Shriffin (1968) provides sound evidence on an account of memory in terms of both structure and process and has encouraged psychologists to conduct further research into the MSM I feel that it fails to highlight the structures and processes of the memory. According to the MSM, STM and LTM operate in a single uniform fashion or a linear fashion. Evidence that disproves this idea came from the case study of KF (Shallice and Warrington, 1970). They found that KF, who had suffered brain damage, found it difficult to deal with verbal information in STM but had a normal ability to process visual information. ...read more.

Ruchkin et al. tested this by asking participants to recall a set of words and pseudo-words. Two large differences were found in the brain activity monitored. If words and pseudo-words involved just STM then activity should have been the same for both conditions, however there was much more activity when real words were processed indicating the involvement of other areas of the brain. They concluded that STM is actually just part of LTM which is activated at any given time. The working memory model also embraces the theory of a short-term store. The MSM model?s STM was a place to hold information as it is being moved into LTM, whereas the concept of the working memory model is that it is an end in itself. It is a place where information is held until it is put to use. ...read more.