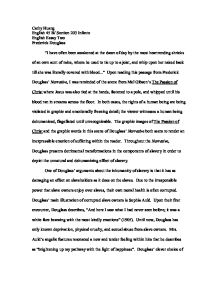 The Passion of Christ

Cathy Huang English 45 B/ Section 203 Infante English Essay Two Frederick Douglass "I have often been awakened at the dawn of day by the most heartrending shrieks of an own aunt of mine, whom he used to tie up to a joist, and whip upon her naked back till she was literally covered with blood..." Upon reading this passage from Frederick Douglass' Narrative, I was reminded of the scene from Mel Gibson's The Passion of Christ where Jesus was also tied at the hands, fastened to a pole, and whipped until his blood ran in streams across the floor. In both cases, the rights of a human being are being violated in graphic and emotionally freezing detail; the viewer witnesses a human being dehumanized, flagellated until unrecognizable. The graphic images of The Passion of Christ and the graphic words in this scene of Douglass' Narrative both seem to render an inexpressible emotion of suffering within the reader. Throughout the Narrative, Douglass presents detrimental transformations in the components of slavery in order to depict the unnatural and dehumanizing effect of slavery. One of Douglass' arguments about the inhumanity of slavery is that it has as damaging an effect on slaveholders as it does on the slaves. Due to the irresponsible power that slave owners enjoy over slaves, their own moral health is often corrupted. ...read more.

During one of the graphic scenes of the victimization of female slaves, Auld's misuse of religion becomes evident. To justify his deeds, "he would quote this passage of Scripture-'He that knoweth his mater's will, and doeth it not, shall be beaten with many stripes" (1917). Here, Douglass seems to imply that slavery has indeed given Auld the title of "master"; however, slavery is an unnatural institution and thus, Auld's transformation from incompetent and powerless master to strong upstanding Christian is unnatural as well. Douglass also uses his next master, Edward Covey, to present an example of a slave owner perverting Christianity. Covey, just like Auld, considers himself a pious and upstanding Christian man. When Douglass first hears of Covey, he is described as "a professor of religion-a pious soul-a member and a class-leader in the Methodist church" (1918). However, this pope-like quality, combined with "his reputation as a 'n****r breaker'" falsifies Covey's faith and illustrates the negative effects of slaveholding on slave owners. Through Covey, Douglass gives his readers a plethora of examples that illustrate the distinction between true Christianity and false Christianity. First, he presents many of the strengths and capabilities that Covey possesses. He "had acquired a very high reputation for breaking young slaves, and this reputation was of immense value to him" (1918). Accomplishments are a natural thing to take pride in; whether it is in music, sports, or dancing. ...read more.

Once again, we perceive an irony that points to the absurdity of slavery as it transforms humans into animals. Nothing else could be more unnatural. Finally, we look into Douglass' own personal transformations. The protagonist Douglass exists in the Narrative as a character in process and flux, formed and reformed by pivotal scenes. The first one is Captain Anthony's whipping of Aunt Hester which introduces Douglass to the physical and psychic cruelty of slavery. The second is when he becomes committed to literacy after Hugh Auld's order that Sophia Auld cease teaching him. Douglass is then reintegrated into slavery and loses his desire to learn at Hugh Auld's order and at Covey's. "The dark night of slavery close in upon me; and behold a man transformed into a brute!" Finally, Douglass reestablishes a sense of self justice through his fight with Covey. "You have seen how a man was made a slave; you shall now see how a slave was made a man." Douglass thus emerges as a figure formed negatively by slavery and cruelty, and positively by literacy education and a controlled but aggressive insistence on rights. As the representative slave, Douglass portrays for the reader an autobiography as well as a treatise against slavery. Throughout the Narrative is the recurrent structure: Douglass presents his personal experience as a typical slave experience, then makes an analytical point about the experience In addition, he uses his own personal account to show detrimental transformations of his character as shaped by the slaveholding institution. ...read more.