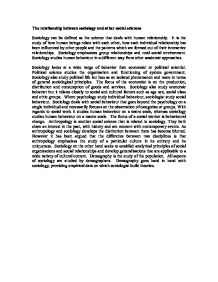 The relationship between sociology and other social sciences Sociology can be defined as the science that deals with human relationship. It is the study of how human beings relate with each other, how each individual relationship has been influenced by other people and the patterns which are formed out of their interactive relationships. Sociology emphasizes group relationships and total social environment. ...read more.

The focus of the economist is on the production, distribution and consumption of goods and services. Sociology also study economic behavior but it relates closely to social and cultural factors such as age sex, social class and ethic groups. Where psychology study individual behaviour, sociologist study social behaviour. Sociology deals with social behaviour that goes beyond the psychology on a single individual and necessarily focuses on the observation of categories or groups. ...read more.

As anthropology and sociology develops the distinction between them has become blurred. However it has been argued that the difference between two disciplines is that anthropology emphasizes the study of a particular culture in its entirety and its uniqueness. Sociology on the other hand seeks to establish analytical principles of social organizations and social relationships and develop generalizations that are applicable to a wide variety of cultural context. Demography is the study of the population. All aspects of sociology are studied by demographers. Demography goes hand in hand with sociology, providing empirical data on which sociologist build theories. ...read more.