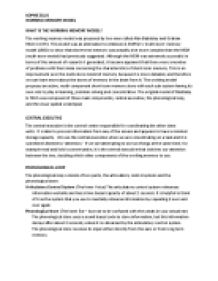 The working memory model was proposed by two men called Alan Baddeley and Graham Hitch in 1974.

﻿SOPHIE ELLIS WORKING MEMORY MODEL WHAT IS THE WORKING MEMORY MODEL? The working memory model was proposed by two men called Alan Baddeley and Graham Hitch in 1974. This model was an alternative to Atkinson & Shiffrin's 'multi-store' memory model (1968) to show that short-term memory was actually a lot more complex than the MSM (multi-store model) had previously suggested. Although the MSM was extremely successful in terms of the amount of research it generated, it became apparent that there were a number of problems with their ideas concerning the characteristics of short-term memory. This is an improvement over the multi-store model of memory because it is more detailed, and therefore we can learn more about the stores of memory in the brain from it. The working model proposes an active, multi-component short-term memory store with each sub-system having its own role to play in learning, problem solving and concentration. ...read more.

It is helpful to think of it as the system that you use to mentally rehearse information by repeating it over and over again. Phonological Store (The Inner Ear ? but not to be confused with the canals in your actual ear) The phonological store uses a sound based code to store information, but this information decays after about 2 seconds, unless it is rehearsed by the articulatory control system. The phonological store receives its input either directly from the ears or from long term memory. VISUO-SPATIAL SCRATCHPAD The visuo-spatial sketchpad stores and manipulates visual information; input is from the eyes or long term memory. If you imagine an object and then picture it rotating you are using your visuo-spatial sketchpad. EPISODIC BUFFER The episodic buffer was a late addition to the working memory model and was added by Baddeley in 2000. The central executive has no storage of its own and the other two stores hold either visual or auditory data. ...read more.

In a 1997 piece, Baddeley stated that mentally counting the windows on a house is an example of the working memory model in action. This process begins with a visualization of every window which corresponds with the Visuo-Spatial Sketchpad of the model. The counting of each window brings the Phonological Loop into play while the Central Executive coordinates all of this activity. WEAKNESSES The primary part of the working memory model is the Central Executive which is still not clearly explained nor understood. Its functions are unclear and extremely difficult to test. Baddeley states that the Central Executive only has a limited capacity but at present, there seems to be no way to separate it to find out conclusively. He also claims that it is possible to divide the Central Executive into smaller systems but has thus far failed to positively do so. The Episodic Buffer which was brought into the equation remains a mystery to researchers in terms of how it binds together information from the model?s other parts and LTM. ...read more.