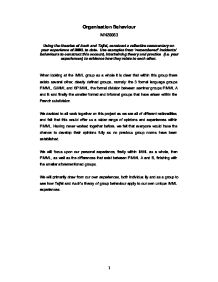 Theories of Asch and Tajfel

Organisation Behaviour MN20083 Using the theories of Asch and Tajfel, construct a reflective commentary on your experience of IMML to date. Use examples from 'remembered' incidents/ behaviours to construct this account, intertwining theory and practice (i.e. your experiences) to evidence how they relate to each other. When looking at the IMML group as a whole it is clear that within this group there exists several other, clearly defined groups, namely: the 3 formal language groups FIMML, GIMML and SPIMML, the formal division between seminar groups FIMML A and B and finally the smaller formal and informal groups that have arisen within the French subdivision. We decided to all work together on this project as we are all of different nationalities and felt that this would offer us a wider range of opinions and experiences within FIMML. Having never worked together before, we felt that everyone would have the chance to develop their opinions fully as no previous group norms have been established. We will focus upon our personal experience, firstly within IMML as a whole, then FIMML, as well as the differences that exist between FIMML A and B, finishing with the smaller aforementioned groups. We will primarily draw from our own experiences, both individually and as a group to see how Tajfel and Asch's theory of group behaviour apply to our own unique IMML experiences. * IMML We will first compare IMML to other degrees within our department, namely BBA and ESML. ...read more.

According to Tajfel: this was so that others could have a chance. Harry sacrificed his own interests for the good of the group as a whole. This shows how Harry moved from thinking individually (personal identity), doing what benefited him, to "feeling and thinking as a representative of a group". This also complies with Asch's theory about how groups influence individual attitudes and behaviour. "Observing norms is of such benefit to us that we are prepared to suppress any personal desires and are thus willing to limit our individual freedom and abide by them"5. Harry therefore supports both the theory of Tajfel as well as Asch's. As a second example of this we refer to an IMML Spanish student, Steve*, who came into the IMML French group in the second year. The French group felt that the new student was violating pivotal norms of our group. Such norms were: speaking a lot during the classes; criticising teachers; and overtly expressing his opinions without taking other's opinions into consideration. His norms could either derive from the norms he had learned in his first year in the Spanish group, or due to his individual differences that he has gained through his culture, since his French nationality is exceptional to that of the group. After being in the French IMML group for a few weeks, there was tension between the new student and his language group, whereas the seminar group B didn't seem affected by the new presence because the new student was not in the same group. ...read more.

In addition to this we believe that established groups do not conform to newcomers, but newcomers conform to previously established groups. Furthermore, conformity in smaller groups is easier than in bigger groups due to the individual behaviour, which becomes more apparent the smaller the group gets. This was highlighted with the example of the OB lecture, where people did not conform. This stands in comparison to Harry, who in fact conformed to what the students of Seminar B solicited upon him. As a group we initially struggled to find many examples of norms within FIMML, as they are not obvious to us because we already conform to them. This shows how the group norms bind the group together and that there are different sets of both pivotal and peripheral norms, which differ between the divisions from IMML as a whole to separate language groups. In a culturally diverse group, as the IMML course is, it is difficult to make broad assumptions of group norms and to apply the theories of Asch and Tajfel because the norms of this formal group have not derived from evolving collective group behaviour but from their own personal environments. 2172 Words (Excluding quotations) 1 Huczynski and Buchanan. Organisational Behaviour: An introductory text, 5th Edition. Financial Times Prentice Hall, 2004. Page 356. 2 Op. Cit. Page 356. 3 Op. Cit Page 356 4 Op. Cit. Page 356 5 Op. Cit. Page 373 *The true name of the student has been changed for anonymity purposes. 6 Op. Cit. Page 355. 7 Op. Cit. Page 375. ?? ?? ?? ?? 1 ...read more.