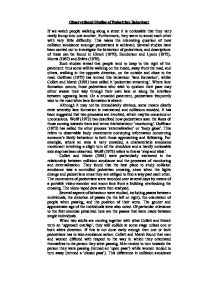 This raises the interesting question of how collision avoidance amongst pedestrians is achieved. Several studies have been carried out to investigate the behaviour of pedestrians, and descriptions of these can be found in Hirsch (1970

Observational Studies of Pedestrian Behaviour If we watch people walking along a street it is noticeable that they very rarely bump into one another. Furthermore, they seem to avoid each other with very little difficulty. This raises the interesting question of how collision avoidance amongst pedestrians is achieved. Several studies have been carried out to investigate the behaviour of pedestrians, and descriptions of these can be found in Hirsch (1970), Henderson and Lyons (1972), Morris (1967) and Stilitz (1970). Such studies reveal that people tend to keep to the right of the pavement: thus some will be walking on the inside, away from the road, and others, walking in the opposite direction, on the outside and close to the road. Goffman (1972) has termed this behaviour 'lane formation', whilst Collett and Marsh (1981) have called it 'pedestrian streaming'. Where lane formation occurs, those pedestrians who wish to quicken their pace may either weave their way through their own lane or along the interface between opposing lanes. On a crowded pavement, pedestrians frequently take to the road when lane formation is absent. Although it may not be immediately obvious, some means clearly exist whereby lane formation is maintained and collisions avoided. ...read more.

while women tended to turn away (termed a 'closed pass'). This difference in collision avoidance behaviour between the sexes was found to be statistically highly significant. The difference is illustrated in Figure 1. Further examination of the data showed that the type of pass was not simply a natural orientation according to which leg was forward at the time of passing. Even when a closed pass needed more effort than an open one, women were still significantly more likely to angle themselves in this way. Collett and Marsh's explanation for this finding is that women wish to protect their b*****s. Their explanation is supported by the movement of the arms during a pass: more women than men drew one or both their arms across their body when passing another person. Again, this difference was statistically highly significant. Kendon and Ferber (1973) found similar behaviour in their analysis of greetings and salutations. Significantly more women were observed to draw an arm across their bodies immediately prior to a close salutation. However, Kendon and Ferber pointed out that this might simply be due to the transference of an article such as a purse or a newspaper from one hand to the other in order to prepare for the greeting. ...read more.

This finding would seem to be well established: pedestrians tend to move towards, and walk on, the right. (Taken from Mcilveen, R., Higgins, L., & Wadeley, A. (1992) BPS Manual of Psychology Practicals. Exeter: BPCC Wheatons Ltd.) HYPOTHESES The aim of the first exercise presented here is to attempt to replicate Collett and Marsh's (1981) finding that adult men and women orient themselves differently when avoiding a collision. Replication is an important part of the scientific process, and an attempt to confirm Collett and Marsh's findings would further our knowledge about pedestrian behaviour. On the basis of their research, it may be hypothesized that there will be a significant difference in the collision avoidance behaviour of adult men and women such that women will tend to make more closed than open passes and men more open than closed passes when avoiding other pedestrians. The null hypothesis predicts no significant differences in the type of collision avoidance behaviour of men and women. General Background References GOFFMAN, E. (1972). Relations in Public. Harmondsworth: Penguin. HIRSCH, V. (1970) A Study of Pedestrian Behaviour. New York: City University of New York. HUTT, S.J and HUTT, C. (1970) Direct Observation and Measurement of Behaviour. Illinois: Charles C. Thomas. MORRIS, D. (1967). The Naked Ape. London: Jonathan Cape. RYAVE, L.A. and SCHENKEIN, J.N (1974) Notes on the Art of Walking. In R. Turner (Ed.) Ethnomethodology. Harmondsworth: Penguin. ...read more.