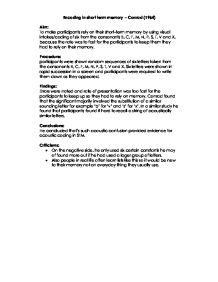 Findings: Peterson and Peterson found that participants were able to recall trigrams after three seconds. They recalled fewer after 6 seconds and at 18 recall was very poor. Conclusions: Is that memory trace in short-term memory has just about disappeared after 18 seconds. It's as if the information is written on a magic slate and as time passes the writing fades away. Criticisms: * On the positive side we the simple nature of the experiment means that we can clearly identify the effect of the independent variable (time delay) on the dependent (recall). * The research lack mundane realism as a recall of trigrams are not representative in everyday memory demands. Duration in long-term memory - Bahrick ET AL (1975) Aim: To find out if people do have very long-term memories that are not confabulated. Procedure: They asked 392 ex high school students of various ages to free recall names of any classmates and also showed them a set of appropriate photographs and asked them to identify individuals Findings: Even after 34 years ex-students were still able to name 90% of photographs of their classmates. After 48 years this had declined to 80% for name recognition and 40% for face recognition. Free recall was considerably less accurate: 60% accurate after 15yrs and only 30% accurate after 15yrs. Conclusions: The findings show that classmates are rarely forgotten once recognition clues have been given. ...read more.