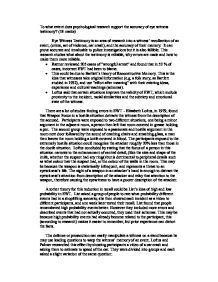 To what extent does psychological research support the accuracy of eye witness testimony?

To what extent does psychological research support the accuracy of eye witness testimony? (18 marks) Eye Witness Testimony is an area of research into a witness' recollection of an event, (crime, act of violence, car crash), and the accuracy of their memory. It can prove accurate and invaluable to police investigations but it is also fallible. This research studies what about the testimony is reliable, why errors are made and how to make them more reliable. * Rattner reviewed 205 cases of "wrongful arrest" and found that in 52 % of cases, incorrect EWT had been to blame. * This could be due to Bartlett's theory of Reconstructive Memory. This is the idea that witnesses take original information (e.g. a folk story, as Bartlett studied in 1932), and use "effort after meaning" with their existing ideas, experience and cultural teachings (schemas). * Loftus said that certain situations improve the validity of EWT, which include proximity to the incident, racial similarities and the sobriety and emotional state of the witness. There are a lot of studies finding errors in EWT - Elizabeth Loftus, in 1979, found that Weapon Focus in a hostile situation detracts the witness from the description of the accused. ...read more.

Loftus and Palmer researched this effect by showing participants a video of a car crash and asking them to estimate to speed of the car. They were divided into groups and each asked a slight variation of the same question: * How fast were the cars going when they Contacted each other? * How fast were the cars going when they Hit each other? * How fast were the cars going when the Smashed each other? It was found that this word affected the speed estimation. There was roughly 10mph difference between the contacting cars and the smashing cars. One week later, those in the "smashed" group consistently reconstructed their memories to include broken glass. However, there is very low ecological validity in this experiment, it has confounded variables such as age and gender, and the stress levels of the participants. It also has the possibility of having demand characteristics due to the groups, people will not want to be abnormal and not go along with the group's answer (Levels of conformity). Conformity can influence EWT as people want to give answers that are "acceptable" to their peers, known as Normative influence, or when unsure, a participant can look to other members of the group for guidance and assurance, (informational influence). ...read more.

Foster told one group that it was a real robbery and that their choice would affect the trial, the other group assumed it was a simulation. The group who felt the consequences of their actions made fewer mistakes. This creates doubt for lab experiments into EWT due to their lack of ecological validity. Christianson and Hubinette researched "real-life" witnesses. Victims, (rather than onlookers) could recall details very accurately and still had good recall after 15 months. This evidence helps to prove Loftus' theory that proximity and having powerful emotions can have a very positive effect on EWT. In conclusion, although there is a large quantity of research into the fallibility of eyewitness testimonies, all of which viable and not without merit, however the artificiality of the majority of the experiments make it hard to prove them true. Many confounding factors may have an impact on a testimony in "real-life" such as stress, panic, fear, eye sight, visibility due to smoke/rain/distance from the incident, intoxication, novelty factor, time lapse between event and testimony, social desirability, the desire to please the interrogator, interference, and how much responsibility comes with giving the testimony. The Flashbulb Memory model also has influence here and is apparent in Christianson and Hubinette's research, as most witnesses to violence or crime can remember it as though taking a "photograph" and can remember the smells and colours for years. ...read more.