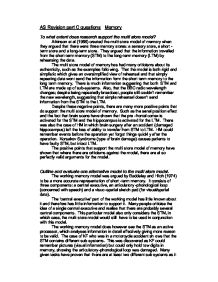 To what extent does research support the multi store model?

AS Revision part C questions Memory To what extent does research support the multi store model? Atkinson et al (1968) created the multi store model of memory when they argued that there were three memory stores: a sensory store, a short-term store and a long-term store. They argued that the information travelled from the short-term memory (STM) to the long-term memory (LTM) by rehearsing the data. The multi store model of memory has had many criticisms about its authenticity, such as the examples following. That the model is both rigid and simplistic which gives an oversimplified view of rehearsal and that simply repeating data wont send the information form the short term memory to the long term memory. There is much information suggesting that both STM and LTM are made up of sub-systems. Also, that the BBC radio wavelength changes; despite being repeatedly broadcast, people still couldn't remember the new wavelength, suggesting that simple rehearsal doesn't send information from the STM to the LTM. ...read more.

The working memory model does however see the STM as an active processor, which analyses information in detail effectively giving more reason to be valid. The case of KF who was in a motorcycle accident shows that the STM contains different sub-systems. This was discovered as KF could remember pictures (visual information) but could only hold tow digits in memory, showing the articulatory-phonological loop was damaged. Many given tasks have proven that there are at least two different sub systems as it is easy to do visual and verbal tasks simultaneously, yet very hard to do two visual or verbal tasks simultaneously (using the same sub-system). PET scans show activity in different parts of the brain for each visual and verbal tasks. This evidence suggests that this model is closer than the multi store model yet the STM is more complicated and that more should be researched in to the central executive part of the STM. ...read more.

These are long lasting and vivid pictures. McCloskey et al. researched into the idea of whether flash bulb memory was reliable. It was found that participants did forget elements of the even and showed inaccuracies in their recall. This suggests that flash bulb memories are subject to forgetting in the same way that other memories are. Conway et al. (1994) re-researched in to this idea and used a different even to remember, one with important consequences on people. It was shown that 86% still had flash bulb memories after 11 months (29% in other countries). Such supporting arguments for this and similar cases include: the existence of recovered memory syndrome, success of psychoanalysis at recovering traumatic memories and the studies of WW2 veterans showed that many who had experienced battlefield trauma appeared to repress the memories. Although, to match the supporting points, there are also negative points including: false memory syndrome, the fact that there is no scientific evidence as most has come form self-reports and the existence of past traumatic stress disorder (rather than repressing traumatic memories, remembering them causing stress). ...read more.