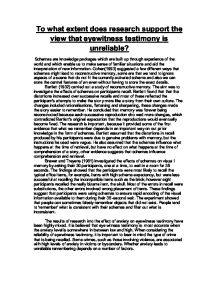 To what extent does research support the view that eyewitness testimony is unreliable?

To what extent does research support the view that eyewitness testimony is unreliable? Schemas are knowledge packages which are built up through experience of the world and which enable us to make sense of familiar situations and aid the interpretation of new information. Cohen(1993) suggested a few different ways that schemas might lead to reconstructive memory, some are that we tend to ignore aspects of a scene that do not fit the currently activated schema and also we can store the central features of an even without having to store the exact details. Bartlett (1932) carried out a study of reconstructive memory. The aim was to investigate the effects of schemas on participants recall. Bartlett found that that the distortions increased over successive recalls and most of these reflected the participant's attempts to make the story more like a story from their own culture. The changes included rationalisations, flattening and sharpening, these changes made the story easier to remember. He concluded that memory was forever being reconstructed because each successive reproduction showed more changes, which contradicted Bartlett's original expectation that the reproductions would eventually become fixed. The research is important, because it provided some of the first evidence that what we remember depends in an important way on out prior knowledge in the form of schemas. Bartlett assumed that the distortions in recall produced by his participants were due to genuine problems with memory, but the instructions he used were vague. ...read more.

Loftus concluded that the fear or anxiety induced by the sight of a weapon narrows the focus of attention and gives rise to very accurate recall of the central details of the scene, but less accurate recall of peripheral details. Research by Loftus and Burns (1982) provided support for these findings; the people that watched the violent version of the short film where the boy was shot in the face were less rise to very accurate in recalling information about the crime. However, it is mainly laboratory studies that produce this result, and they could be accused of lacking validity as a rather different picture emerges if we look at field studies of real-life events. This experiment raises ethical issues about the welfare of the participants who were deceived and who also may have been upset by witnessing a bloodstained paper knife. Christianson and Hubinette (1993) questioned 110 witnesses who had, between them, witnessed a total of 22 genuine, as opposed to staged, bank robberies. The researchers found that victims were more accurate in their recall and remembered more details about what the robbers wore, their behavior and the weapon used than people who had been bystanders. Christianson and Hubinette concluded that people are good at remember highly stressful events if they occur in real life rather than the artificial surroundings in the laboratory. ...read more.

Ceci and Bruck(1993) have reviewed research findings on children's memory and summarized the main factors that they believe can affect children's eyewitness testimony. These factors include interviewer bias, repeated questions, stereotype induction, encouragement to imagine and visualise, peer pressure and authority figures. They concluded that while pre-school children are capable of providing relevant eyewitness testimony they are more suggestible than adults. Also if they are exposed to leading questions and misleading questions interview techniques, children may get peripheral details and the central gist of events wrong. The term leading question refers to a question that is worded in such a way that it might bias how a respondent answers. Research has shown how even subtle changes to the wording of a question can effect eyewitness testimony. The Loftus and Palmer(1974) study was to test their hypothesis that the language used in eyewitness testimony can alter memory. To test this Loftus and Palmer asked people to estimate the speed of motor vehicles using different forms of questions. They found that the estimated speed was affected by the verb used. The verb implied information about the speed, which systematically affected the participants' memory of the accident. This research suggests that memory is easily distorted by questioning technique and information acquired after the event can merge with original memory causing inaccurate recall or reconstructive memory. The research lacks mundane realism, as the video clip does not have the same emotional impact as witnessing a real-life accident and so the research lacks ecological validity. ...read more.

The Response to the Question here is excellent, though it often forgets it's supposed to be a cohesive essay, rather than just a chunk of information. The candidate has a nigh-on encyclopaedic knowledge of a number of studies, all of ...

The Response to the Question here is excellent, though it often forgets it's supposed to be a cohesive essay, rather than just a chunk of information. The candidate has a nigh-on encyclopaedic knowledge of a number of studies, all of which are entirely appropriate to answering a question which asks about the reliability of eye-witness testimony. There is a bias towards research that proves schemas affect memory and the encoding of information, but this is nothing that will hinder the candidate as it is all relevant information - some examiners may require a wider range of conclusions though, such as perhaps, a greater recognition of the effect of post-event information and leading questions (though this has been sufficiently covered by the Loftus & Palmer study in this case).

Where the candidate drops marks is that they have no real introduction or conclusion, leaving the essay very open and sounding incomplete by ending it with a vocabulary-heavy paragraph on just one of many studies. An introductory paragraph outlining what eye-witness testimony is and the extensive research into it may be advisable, and a conclusive paragraph summarising the findings in the above essay as well as the difficulty of reliably testing for hypothetical constructs like memory, intelligence and schemas could help round the essay off.

The Level of Analysis here is quite hard to determine, as the questions to ask for candidates to satisfy AO1 (knowledge and understanding) and AO2 (evaluation). There is an accurate use of highly complex terminology and the candidate displays a profound knowledge of a large number of studies pertaining to eye-witness testimony. But there does not appear to be much in the way of explicit, effective evaluation of the studies, such as the complication of face validity that may arise whilst trying to examine cognitions like memory, or the fact that many cognitive studies have high levels of control due to being set in artificial conditions with high levels of control (e.g. Loftus & Palmer, Cohen, Kent & Yuille). Because of this, the evaluative points are limited are therefore the candidate cannot expect to reach the higher band of marks for this answer.

I would recommend the candidate draw back much of the explanation of the studies and possibly drop a few of them altogether, so as to leave sufficient time to consider the evaluation of the studies, which would far better answer the question "To what extent does research support the view that eyewitness testimony is unreliable?" than simply outlining studies. As it stands, this candidate's lack of concluding paragraph and evaluative points mean it's stuck at a low C grade because there is so little focus on AO2, and an unfair bias towards AO1.

The Quality of Written Communication (QWC) is flawless. These types of essay questions have a heavier weighting toward QWC than most other psychology questions and it is good to see the candidate realise this and make almost no errors in spelling or grammar. As QWC is marked highly here, spell-checking and re-reading is recommended to ensure clarity of written expression.