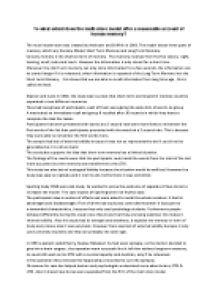 To what extent does the multi-store model offer a reasonable account of human memory?

﻿To what extent does the multi-store model offer a reasonable account of human memory? The multi model store was created by Atkinsom and Shiffrin in 1968. The model shows three parts of memory, which are; Sensory Model, Short Term Memory and Long Term Memory. Sensory memory is the shortest term of memory. The memory receives from the five senses; sight, hearing, smell, taste and touch. However the information is only stored for a short time. Moreover the short term memory can only store information for a few seconds, the information can be stored longer if it is rehearsed, when information is repeated of the Long Term Memory into the Short term Memory, this shows that we are able to recall information from long time ago , this is called retrieval. Glazner and Cuniz in 1966, the study was to prove that short-term and long term memory could be separated in two different memories. ...read more.

This study has also lack of ecological Validity because the situation would be artificial. However the study was easy to replicate and it met its aim, furthermore it was controlled. Sperling study 1960 was a lab study, he wanted to prove the existence of separate of two stores to increases the model . The case studies of Sperling were rich fruitful data . The participants saw a number of effects and were asked to recall the whole numbers. It had its advantages and disadvantages. First of all the lab study was controlled however it was open to a demanded characteristics, because they only used psychology students. Furthermore people behaved differently during the study since they know that they are being watched, this makes it internal validity. Also this study had its strength and weakness, it explains the memory in term of study and process also it was very basic. ...read more.

Moreover it also suggests that STM is more complicated to separate because of hearing and visual information. In conclusion the Multi-store Model does not separate the difference level in the long term memory because is more complex, the psychologists make it so sound so easy that only rehearsals make long term memory is too simple for the transfer of information. The MSM does not look at the effort and strategy of the participants. The model looks only at the basic structure of the memory it does not show that the type of information is actually being processed. There is also empirical support in the MSM model, for example the Glazer & Cuntiz in 1966 and the brain surgery of HM shows the existence of different stores in the STM and LTM The model reduces a complex area to something that is very simple. The model is very useful because it shows why remember information better than other. The information that shows can decide how effective the multi store model is when it comes to explaining memory. ...read more.