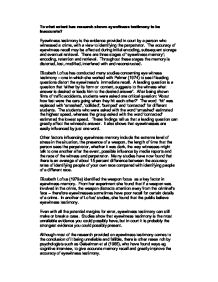 To what extent has research shown eyewitness testimony to be inaccurate?

To what extent has research shown eyewitness testimony to be inaccurate? Eyewitness testimony is the evidence provided in court by a person who witnessed a crime, with a view to identifying the perpetrator. The accuracy of eyewitness recall may be affected during initial encoding, subsequent storage and eventual retrieval. There are three stages of 'eyewitness memory'; encoding, retention and retrieval. Throughout these stages the memory is distorted, lost, modified, interfered with and reconstructed. Elizabeth Loftus has conducted many studies concerning eye witness testimony - one in which she worked with Palmer (1974) to see if leading questions distort the eyewitness's immediate recall. ...read more.

These findings tell us that a leading question can greatly affect the witness's answer. It also shows that eyewitnesses are easily influenced by just one word. Other factors influencing eyewitness memory include the extreme level of stress in the situation, the presence of a weapon, the length of time that the person sees the perpetrator, whether it was dark, the way witnesses might talk to one another after the event, possible influence by media reports and the race of the witness and perpetrator. Many studies have now found that there is an average of about 15 percent difference between the accuracy rates of identifying people of your own race compared with identifying people of a different race. ...read more.