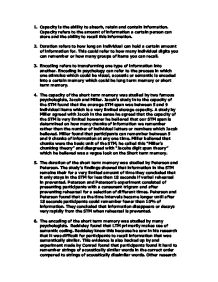 1. Capacity is the ability to absorb, retain and contain information. Capacity refers to the amount of information a certain person can store and the ability to recall this information. 2. Duration refers to how long an individual can hold a certain amount of information for. This could refer to how many individual digits you can remember or how many groups of items you can recall. 3. Encoding refers to transforming one type of information into another. Encoding in psychology can refer to the process in which one stimulus which could be visual, acoustic or semantic is encoded into a certain memory which could be long term memory or short term memory. 4. The capacity of the short term memory was studied by two famous psychologists, Jacob and Miller. Jacob's study into the capacity of the STM found that the average STM span was between 5 and 9 individual items which is a very limited storage capacity. A study by Miller agreed with Jacob in the sense he agreed that the capacity of the STM is very limited ...read more.

Other research was also used to back up the point that the LTM and the STM encode differently, one of these was a study by Wickelgren and Baddeley who found that when storing items into the STM if a participant is given information consisting of acoustically similar and dissimilar words and semantically similar and dissimilar words. They found that the participants found it harder to store and recall semantic words compared to acoustic words which had no affect. 7. Bahrick's studies into the duration into the long term memory found that people can remember certain types of information for almost a lifetime. Bahrick found that information can be stored for over 47years if sparked by a stimulus. Bahrick set out this investigation using graduates from a particular high school in America over a 50-year period. A group of participants were given a group of names and asked to select the name that matched the person. The other group were only asked to name the person with no visual stimulus. ...read more.