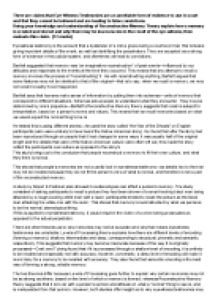 Using your knowledge and understanding of Reconstructive Memory Theory explain how a memory is created and stored and why there may be inaccuracies in the recall of the eye-witness, then evaluate this claim

﻿There are claims that Eye Witness Testimonies are an unreliable form of evidence to use in court and that they cannot be believed and are leading to false convictions. Using your knowledge and understanding of Reconstructive Memory Theory explain how a memory is created and stored and why there may be inaccuracies in the recall of the eye-witness, then evaluate this claim. [12 marks] Eyewitness testimony is the account that a bystander of a crime gives during a courtroom trial; this includes giving important details of the event, as well as identifying the perpetrators. They are accepted as a strong form of evidence in the judicial system, and oftentimes will lead to convictions. Bartlett suggested that memory was ?an imaginative reconstruction? of past events?influenced by our attitudes and responses to the events at the time they occurred. This means that any attempt to recall a memory involves the process of ?reconstructing? it. ...read more.

This study brings us to the conclusion that people reconstruct a memory to fit their own culture, and what they think is normal. This shows that people?s memories are not a useful tool in eyewitness testimony?as details key to the trial may not be recalled because they do not fit the person?s view of what is normal, and therefore is not a part of the reconstructed memory. A study by Allport & Postman also showed how stereotypes can affect a person?s memory. The study consisted of asking participants to recall a picture they had been shown of a smart-looking black man being attacked by a rough-looking white man with a razor; participants tended to recall the picture as the black man attacking the white one with the razor. This shows that memory is reconstructed by what we perceive to be the normal, stereotypical thing. ...read more.

The two theories differ because Levels of Processing goes further to explain why certain memories may not be as strong as others, based on the level of which a memory is formed; whereas Reconstructive Memory theory suggests that it is to do with a person?s opinion and attitude on what a ?normal? thing to see is, and is manipulated from that opinion. However, both studies offer insight as to why eyewitness testimonies may become unreliable as evidence in a court of law. Reconstructive Memory theory, therefore, suggests that as a result of memories being created and stored through schemas and imaginative reconstruction, memories become unreliable as a piece of evidence because people piece the memory back together according to what they think should be the normal way the memory went. This explains how eyewitness testimony is unreliable because it means that despite what actually happened, an eyewitness may give an account leading to the prosecution of a wrongly accused person because they have reconstructed the memory in an incorrect way as a result of stereotyping and their own beliefs. ...read more.