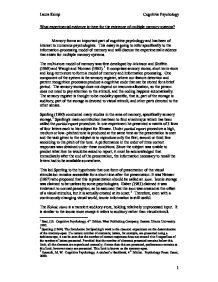 What experimental evidence is there for the existence of multiple memory systems?

What experimental evidence is there for the existence of multiple memory systems? Memory forms an important part of cognitive psychology and has been of interest to numerous psychologists. This essay is going to refer specifically to the information-processing model of memory and will discuss the experimental evidence that exists for multiple memory systems. The multi-store model of memory was first developed by Atkinson and Shiffrin (1968) and Waugh and Norman (1965).1 It comprises sensory stores, short term-store and long-term store to form a model of memory and information processing. One component of the system is the sensory register, where our feature detection and pattern recognition processes produce a cognitive code that can be stored for a brief period. The sensory storage does not depend on resource allocation, so the person does not need to pay attention to the stimuli, and the coding happens automatically. The sensory register is thought to be modality specific, that is, part of the storage is auditory, part of the storage is devoted to visual stimuli, and other parts devoted to the other senses. Sperling (1960) conducted many studies in the area of memory, specifically sensory storage.2 Sperling's main contribution has been to find a technique which has been called the partial report procedure. In one experiment he presented a matrix of 3 lines of four letters each to his subject for 50msec. ...read more.

Later versions of the model also included an episodic buffer, which lays down time markers, and also some versions split the articulatory loop and the visuo-spatial sketch pad onto two dual slave systems. The last few studies that have been discussed suggest the existence of a short-term memory store. Therefore, this suggests the existence of an opposing system, the long-term store. Also, the nature of the memory code seems to change as a function of its time in the memory system, further evidence of a long-term store. Our long-term memories contain lots of varied information. Consequently it is easy to assume that there are various long-term memory systems, each of which is specialised for certain types of information. Tulving (1972, 1983) proposed a distinction between episodic and semantic memory. Episodic memories were autobiographical, personal and sensitive to the effects of context. According to Tulving, episodic memory refers to the storage (and retrieval) of specific events or episodes occurring in a particular place at a particular time.8 Semantic memory on the other hand, contains information about our knowledge of the world, which could be organised hierarchically. Semantic memory was composed of knowledge that had no specific temporal or spatial referent, and was therefore not sensitive to the effects of context. Although Tulving believed these two systems interact with each other to an extent, he believed that each system probably had its own encoding, storage, and retrieval laws. ...read more.