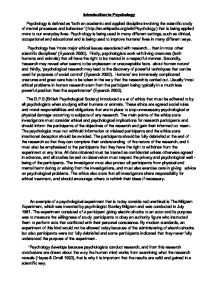 Introduction to Psychology Psychology is defined as 'both an academic and applied discipline involving the scientific study of mental processes and behaviour '(http://en.wikipedia.org/wiki/Psychology) that is being applied more to our everyday lives. Psychology is being used in many different settings, such as clinical, occupational and educational and is being used to improve humans' lives in many different ways. Psychology has 'more major ethical issues associated with research... than in most other scientific disciplines' (Eysenck 2000). Firstly, psychologists work with living creatures (both humans and animals) that all have the right to be treated in a respectful manner. Secondly, 'research may reveal what seems to be unpleasant or unacceptable facts about human nature' and thirdly, 'psychological research may lead to the discovery of powerful techniques that can be used for purposes of social control' (Eysenck 2000). Humans' are immensely complicated creatures and great care has to be taken in the way that the research is carried out. Usually 'most ethical problems in human research stem from the participant being typically in a much less powerful position than the experimenter' (Eysenck 2000). The B.P.S (British Psychological Society) introduced a set of ethics that must be adhered to by all psychologists when studying either humans or animals. These ethics are agreed social rules and moral responsibilities and obligations that are in place to stop unnecessary psychological or physical damage occurring to subjects of any research. The main points of the ethics state investigators must consider ethical and psychological implications for research participants and should inform the participants of the objectives of the research and gain their informed consent. ...read more.

The next method I will explain about is the case study method. A case study involves the detailed gathering of information, 'in which one or two individuals are studied in great detail.' (Eysenck, M. 2000) 'Case studies and field work observations involve the researcher fitting into the environment, to be accepted by the participants the researcher will need to have appropriate materials, equipment, look the part and speak in the same style of language.' (Hammersley, M & Atkinson, P. 1995) An excellent example of the case study method was carried out by Freud on Little Hans, a boy who had developed an extreme fear of horses. According to Freud, Little Hans was sexually attracted to his mother and was scared he would be punished for this by his father, who happened to 'look' like a horse. According to Freud Little Hans was displacing his fear onto the horses, although it is still unclear if Freud's analysis is correct. An advantage of the case study method is that it is a 'good source of hypothesis, and It provides in depth information on an individual(s)' (Eysenck, M. 2000). 'Unusual cases can also shed light on situations that are unethical or impractical to study in other ways.' (Wade & Tavris 1999) Case studies also give the investigator a rich source of information that can be used to enhance ones theoretical understanding, and they can also show when 'a particular theory is in error.' (Eysenck, M.2000) Disadvantages of this method include that firstly, 'vital information may be missing making the case hard to interpret, secondly, the individuals ...read more.