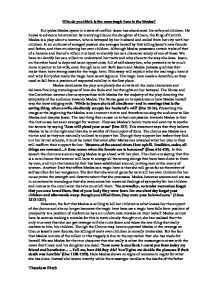 Who do you think is the more tragic hero in the Medea?

Who do you think is the more tragic hero in the Medea? Euripides Medea opens in a state of conflict. Jason has abandoned his wife and children. He hopes to advance his situation by marrying Glauce the daughter of Creon, the King of Corinth. Medea is a play about a woman, who is betrayed by her husband and exiled from her city with her children. In an outburst of enraged passion she avenges herself by first killing Jason's new fianc�e and father, and then murdering her own children. Although Medea possesses certain traits of that of a heroine and that of a villain it is hard to identify her as a character solely of one of these. We have to identify her as a villain to understand her traits and why she acts the way she does. Jason, on the other hand is depicted as an opportunist, full of self absorption, who pretends to be much more superior to his wife, even though he is not. Both Jason and Medea possess qualities that make them have strong cases for the tragic hero. This essay will explain who the real tragic hero is and why Euripides made the tragic hero so ambiguous. The tragic hero needs a downfall, so they need to fall from a position of respected nobility in the first place. Medea dominates the play completely she outwits all the male characters and delivers five long monologues of how she feels and her thoughts on her betrayal. ...read more.

I count you from today my friend and benefactor......Tell me, how did they die? You'll give me double the pleasure if their death was horrible' (line 1128-1129). Here Medea shows no signs of remorse or regret for what she has done. Instead she listens intently while the messenger recollects the deaths of the father and daughter. Her Villainous character is set in cement when Medea murders her children. 'Help, help! Mother, let me go! Mother, don't kill us'......'Help, help, for god's sake! She is killing us' (lines 1273-1276). The cries of her children are so horrible that even the chorus who supported Medea can't accept that what she has done is right. 'O miserable mother, to destroy your own increase, Murder the babes of your body! Stone and iron you are, as you resolved to be' (lines 1277-1280). Her vengeance is b****y and final, leaving Jason alone and pathetic at the play's end as she flies off on her chariot to join Aegeus in Athens. This is the climax of the villainy of Medea and the reason why she can never herself be a tragic hero. Jason is an example of a heroic character that is cast in an unheroic light. The attitude that he is depicted in is of an opportunistic who has absolutely no scruples; he is full of deception and nauseating smugness. He condescends to his wife, although she is in every way superior to him. ...read more.

'The serpent that kept watch over the Golden Fleece... it was I who killed it' (lines 444-446). Once of the most extraordinary things about Jason throughout the whole play is that he refers to his children as Medeas, we automatically presume that he has no attachment to his children, it however is not until the end that he refers to them as his. 'What. Killed my sons? That word kills me' (lines 1310-1311). This is the most heartbreaking scene in the whole play and you can understand the pain and anger that Jason is feeling for he has lost everything where as Medea has gained everything. Jason is broken and desperate at the end 'For God's sake let me touch there gentle flesh.' (Line 403) and here we see the hero at his lowest point, after he has fallen from a position of power to a position of tragedy. Jason is a hero, even though he has no heroism left in him. Of course we can sympathise with Medea, there is no doubt that she must feel hurt and hard done by, but the fact that she murders her children will never make her hero for this is to morally unacceptable. The more we see of the argument for Jason, the more we can relate to Jason. He is arrogant, stupid and void of any emotions, but essentially a good, caring man who is looking out for his wife and children. . Theodora Birch ...read more.