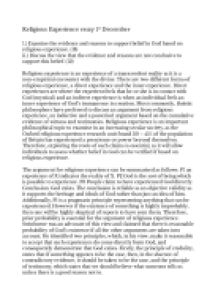 Although these may be weak arguments, they provide evidence to suggest an individual could believe in God. Swinburne writes about the ?sheer weight of testimony?. Furthermore, although many people have religious experiences, David Hay interviewed people and discovered many did not discuss their experiences for fear of being misunderstood. If this is the case, then many experiences have yet to be accounted for and this contributes to the cumulative argument. The corporate argument is similar to the cumulative argument, however it is large number of people experiencing God at the same time rather than individual experiences. For instance, the Toronto Blessing that started on the 10th January 1994. The effects were falling in the spirit, shaking, weeping and laughter. Conversation experiences could provide evidence for a belief in God. Each person has a number of ideas in their mind ranked by importance, which aim is of paramount importance at any one time depends on circumstances. A transformation is when one aim establishes a permanent priority. Professor Edwin D. Starbuck noted that all adolescents go through symptoms similar to a religious experience, caused by feelings incompleteness and imperfect. Therefore, adolescents who claim to have a religious experience could simply be shifting their feelings religion. Whereas William James noted that such discussions like this, prevent people from turning to religion and some are temporarily inhibited. ...read more.

If God is transcendent, then he must be beyond the argument because it cannot be expected to argue him into existence. If God cannot be proved, then he cannot be disproved. He remains a possibility. To conclude, using religious experience as evidence to believe in God is possible. Although those such as AJ Ayer have disregarded religious experience because of the question of validity, claiming God is a transcendent being who is beyond our experience, the definition of God can be searched for in the Judaeo Christian tradition, through prophets and Christ. There is a series of religious experiences beginning with the ingress/in breaking of God into human history through Christ and the prophets, but being continuously validated by congruous religious experience is not ?proof?. Instead, it is an accumulation of evidence, starting with the impossibility of disproving God and contributing to a mounting case of probability as one of the factors in congruous religious experience. The Jewish philosopher Martin Buber argues that God reveals himself to people on a personal level as they experience him through life and in the world. He wrote, in I and Thou, that everyday human relationships are of a simple level, which he calls ?I-it?. However, there are relationships that are much more meaningful and of a deeper level that he calls ?I-thou?. According to Buber, this is the relationship that humans have with God, who is the ?Eternal Thou? ...read more.