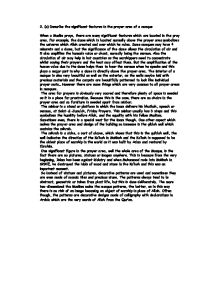 2. (a) Describe the significant features in the prayer area of a mosque

2. (a) Describe the significant features in the prayer area of a mosque When a Muslim prays, there are many significant features which are located in the pray area. For example, the dome which is located normally above the prayer area symbolises the universe which Allah created and over which he rules. Some mosques may have 4 minarets and a dome, but the significance of the dome allows the circulation of air and it also amplifies the human's voice or chant, normally being the sermon. Also the circulation of air may help in hot countries as the worshippers need to concentrate whilst saying their prayers and the heat may affect them. But the amplification of the human voice due to the dome helps them to hear the sermon when he speaks and this plays a major part in why a dome is directly above the prayer area. The interior of a mosque is also very beautiful as well as the exterior, as the walls maybe laid with precious materials and the carpets are beautifully patterned to look like individual prayer mats... However there are some things which are very common to all prayer areas in mosques. The area for prayers is obviously very sacred and therefore plenty of space is needed as it is a place for prostration. ...read more.

This shows that Muslims recognise Allah as something way above their level and that he is the most powerful being in the universe. Although Muhammad is perfect, he is the perfect exemplar for a Muslim and does all the goodly deeds but even Muhammad, is way below the powerfulness of Allah. Another way in which prayers affect the life of a Muslim would be the fact the more they pray to God, the more they unveil from the spiritual world and the better life they will have when it comes to them dying and passing their soul onto the spiritual realms of Allah. By praying it helps their soul become more developed and kindly and in this way makes their soul much more peaceful for when it comes to the next world after they die. Praying may also lead to a Muslim being less detached in life. In this way, it makes them less attached to material objects and makes them concentrate more on Allah, the Qur'an and the most perfect exemplar for a Muslim, Muhammad. The more Muslims pray, the more they appreciate life and are more grateful for what Allah has given them in spiritual terms as oppose to material things. Another way in which prayers may affect the life of a Muslim is that it is a time where they are able to put all their problems in life out of their mind and concentrate on Allah, the greatest of all. ...read more.

Now for Muslims, they will completely disagree in response to this quote and this is because in Islam, they believe all 5 pillars are equally the same. If the Islam faith is to be held and kept in it's best condition, all Muslims should treat every pillar equally, so that the faith can be upheld properly and that no pillar has a bigger significance than another. In the Qur'an it does not state that prayer (salah) is the most important, therefore it should not be made the most important, but be made equally important as oppose to any other pillar (zakah, hajj etc). Now in my opinion, I'm not quite sure what to say. I believe that prayer probably has the bigger significance as it keeps a person in conversation with God every day, making them more spiritual and making them a better person but I do think that if the Qur'an says all 5 pillars should be treated in the same way, then that should be done, as the Qur'an should not be changed for different people, as it's already been written and cannot be changed no more. I think if someone wants to be a Muslim, they must follow what's there and not make their own rules up to satisfy themselves. BY SONNIE SINGH 10JK ...read more.