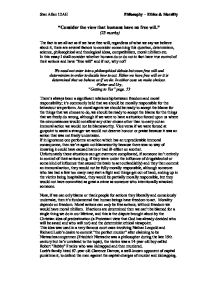 Consider the view that humans have no free will.

"Consider the view that humans have no free will." (25 marks) The fact is we all act as if we have free will, regardless of what we say we believe about it, there are several factors to consider concerning this question, determinism, science, philosophical and theological ideas, compatibilism, moral nihilism etc. In this essay I shall consider whether humans do or do not in fact have true control of their actions and have "free will" and if not, why not? We need not enter into a philosophical debate between free will and determinism in order to decide how to act. Either we have free will or it is determined that we behave as if we do. In either case we make choices. -Fisher and Ury, "Getting to Yes" page. 53 There's always been a significant relationship between freedom and moral responsibility; it's commonly held that we should be morally responsible for the behaviour we perform. As moral agents we should be ready to accept the blame for the things that we choose to do, we should be ready to accept the blame for the things that we freely do wrong, although if we were to have a situation forced upon us where the circumstances would not allow any other choice other than to carry out an immoral action we would not be blameworthy. ...read more.

During the 12-hour hearing on the final day, Darrow gave a speech that has been called the finest of his career. The speech included the following: "This terrible crime was inherent in his organism, and it came from some ancestor... Is any blame attached because somebody took Nietzsche's philosophy seriously and fashioned his life upon it?... It is hardly fair to hang a 19-year-old boy for the philosophy that was taught him at the university?" He famously used determinism in the court to defend their case, claiming that they had no choice and it was always going to happen, he did succeed in the end but both defendants were charged with life imprisonment plus another 99 years for the kidnapping. Loeb was murdered in prison at age 30 by a former cellmate, and Leopold died at age 66 from a heart-attack. Determinism is the view that the universe and its future are already pre-determined by past happenings and occurrences, this is due to living in a universe of cause and effect, something can only do something else when another thing acts upon it, much like the domino effect, knocking down one will knock every other one down. The question "Consider the view that humans have no free will" invites candidates to consider the strength of determinism and all the other factors mentioned earlier. ...read more.

While we have a sense of freedom, a sense of deliberating over our options, determinists maintain this is all an illusion of freedom. Although it doesn't explain human action, yet surely our actions are caused by something? Libertarianism attributes our moral judgement to an objective source, unaffected by environment or the culture we were brought up within, but this is debateable. Just as it's difficult to show how one thing causes another, it's difficult to show that there are no causes beyond our control. Libertarianism doesn't seem to account for human motive, which is caused by something. Soft determinism allows one to believe that some aspects of human beings are determined, but we are morally responsible for our actions. They claim that determinism doesn't rule our free will; they believe that determinism and free will are compatible. This midway position suggests that some of our actions are conditioned, while others have so complex a collection of causes that they may properly be described as freely decided or willed. Soft determinists are criticised by hard determinists for failing to realise the extent to which human freedom is limited, and by libertarians for failing to realise the true extent of human freedom. Sadly, compatibilists have to agree on precisely what is and what isn't a determining factor. The complexities of physics, metaphysics, genetics and psychology make such a line difficult for them to draw. ?? ?? ?? ?? Stan Allen 12AH Philosophy - Ethics & Morality ...read more.