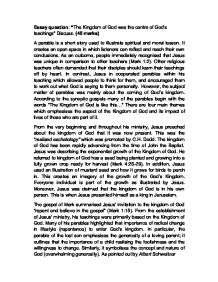 The Kingdom of God was the centre of Gods teachings Discuss.

Essay question: "The Kingdom of God was the centre of God's teachings" Discuss. (45 marks) A parable is a short story used to illustrate spiritual and moral lesson. It creates an open space in which listeners can reflect and reach their own conclusions. As an outcome, people immediately recognised that Jesus was unique in comparison to other teachers (Mark 1:2). Other religious teachers often demanded that their disciples should learn their teachings off by heart. In contrast, Jesus in cooperated parables within his teaching which allowed people to think for them, and encouraged them to work out what God is saying to them personally. However, the subject matter of parables was mainly about the coming of God's kingdom. According to the synoptic gospels many of the parables begin with the words "The Kingdom of God is like this..." There are four main themes which emphasises the aspect of the Kingdom of God and its impact of lives of those who are part of it. ...read more.

From the establishment of Jesus' ministry, his teachings were primarily based on the Kingdom of God. Many of his parables highlighted that importance of radical change in lifestyle (repentance) to enter God's kingdom. In particular, the parable of the lost son emphasises the generosity of a loving parent; it outlines that the importance of a child realising the foolishness and the willingness to change. Similarly, it symbolises the concept and nature of God (overwhelming generosity). As pointed out by Albert Schweitzer Jesus was obsessed "futurist eschatology" A variety of parables were referred to the coming of God's kingdom in the future. The kingdom of God was regarded as a great feast which associated with the blessings of the messianic age. Jesus stressed the emphasis in the biblical accounts that those who heard the gospel will receive an invitation. Conventionally the religious ones (Jews) will have no have no place in it at all, but those who share the blessing its blessings are more likely to be those from the streets than from the sanctuaries (Matthew 22:1; Luke 14:15-24) ...read more.

However, in the gospel account, it states that for God so loved the world he gave his only begotten that whosoever believes in him shall not perish but have everlasting life (John 3:16) This meant the Kingdom of God was Jesus Christ, so the immoral should accept him or they shall perish and not have eternal life. This gave Christians the inspiration to preach the gospel constantly about the kingdom of God. As mentioned in the great feast, the immoral have already received an invitation, but is required accepting the Gospel. It is obvious that Jesus had the art of communication highly developed. Through, his ministry identified the power of teaching. In cooperating parables in his teachings was the most effective ways of communicating with people in general. In particular, the parables in Jesus teaching are a sharp distinction between what future is and what present is. Jesus was an inspiration for present day Christian. He showed that Christianity is not just a religion, but the relationship between men and God. Developing a relationship with God meant inheriting the kingdom of God ...read more.