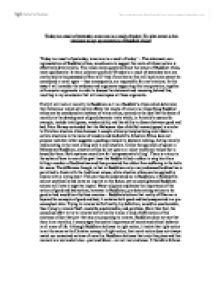 'Today is a result of yesterday, tomorrow is a result of today.' To what extent is this statement an apt representation of Buddhist ethics? 'Today is a result of yesterday, tomorrow is a result of today.' - This statement, as a representation of Buddhist ethics, would seem to suggest the realm of ethical action is effectively deterministic. This raises many questions about the nature of Buddhist ethics, most significantly: Is this a coherent position? If today is a result of yesterday how can one be said to be possessed of free will? And if one has no free will surely one cannot be considered a moral agent - thus consequently, are responsible for one's actions. In this essay I will consider the evidence and arguments supporting this interpretation, together with counter-arguments in order to discuss the statement and reasoning behind this, resulting in my conclusion that will encompass all these arguments. Firstly I will look at morality in Buddhism as it is a Buddhist's ethics which determine their behaviour which ultimately affects the results of tomorrow. Classifying Buddhist ethics can be considered an instance of virtue ethics, centred on the idea that the basis of morality is the development of good character traits which, in Aristotle's system for example, include intelligence, wisdom (sila), and the ability to discern between good and bad. Peter Harvey contended that the Mahayana idea of skilful means (upaya) is similar to Christian situation ethics because it accepts ethical principles being overridden in certain situations in the name of wisdom and bodhichitta. Situation Ethics does not propose rules but rather suggests a guiding principle to decision making; Acting morally means acting in the most loving way in any situation. Unlike the approach of upaya in Mahayanan Buddhism, situation ethics do not ignore or reject traditional values but is bound by them. Both systems may allow for 'compassionate killing'. There is a story in the suttas of how in one of his past lives the Buddha killed a robber to stop him from killing a number of bodhisattvas and thus prevented the robber from suffering in the hells for aeons. ...read more.

The doctrine of dependent origination is fundamental in connecting moral responsibility and causation, especially the ontological status of all matter. The doctrine teaches that all phenomena occur from dependence on causes and circumstances and lack intrinsic nature. The doctrine is expressed in its simplest form in phrase 'idam sati ayam bhavati', which means when this exists, that arises, which logically can be expressed as, when condition A arises, condition B arises, thus its reversal would be that when A doesn't exist, B won't. It is indicated in early sources that the Buddha became fully enlightened under the Bodhi tree when he fully realised the profound truth of Dependent Origination, thus that all matter is conditioned and arise and cease in a determinate chain of events. Therefore in relation to moral responsibility, it could be said that nothing happens out of its own volition, so there are no forces or metaphysical realties, such as a god or soul to act as a determiner, so it could be argued that moral responsibility is one's own, yet with a chain of causation, and no self, it could also be said one cannot be responsible if one doesn't exist. A way of classifying Buddhist ethics in Western terms is by relating it to 'soft determinism'. Soft determinism is a midpoint between the hard determinism of philosophers such as Hobbes, Hume and John Stuart Mill, where the assertion of cause and effect is universal, therefore moral freedom is not possible; and libertarians who believe that uncaused, unconditional choices can be made and that free will exists, as Immanuel Kant stated free will was essential for morality, 'In morals, the proper and inestimable worth of an absolutely good will consists precisely in the freedom of the principle of action' (Robert A Bowie, Ethical Studies, Nelson Thornes, 2001, p59). There is an important relationship between freedom and moral responsibility; it has been commonly held that we should be morally responsible for actions that we freely perform. ...read more.

However, a Buddhist can purify negative karma that has already been committed. There are ten principle non-virtuous actions that should be avoided; Three actions of the body, four of speech, and three of the mind. The three non virtuous bodily actions are killing, stealing and s****l misconduct; the four non virtuous verbal actions are lying, divisive speech, hurtful speech and idle chatter and the three non virtuous mental actions are covetousness, malice and holding wrong views. The best way for a buddhist to avoid negative actions is to practice consideration for others. All kind of non virtuous actions have three kinds of effects, the ripened effect, the effect similar to the cause and the environmental effect. The ripened effect of a negative effect is a rebirth in one of the three lower realms. A Buddhists previous actions will always have a definite outcome on tomorrow, however there are issues such as causality and free will which when taken into consideration make it hard to substantiate whether a Buddhist can be praised or blamed for such actions. The idea of Sunyata means that if everything in existence is empty, morality itself is empty which would mean acting ethically would be impossible, therefore actions are empty so the law of Karma is flawed, this is a contradiction in Buddhist philosophy as it would mean that there can be no actions of yesterday impacting upon the present, therefore I could reach a conclusion disagreeing with the statement 'Today is a result of yesterday, tomorrow is a result of today' as it is impossible to be a result if there are no actions in existence allowing for a future; However, with many ideas in Buddhist philosophy contradicting each other it is hard to conclude on this question as there are too many conflictions between Karma being the universal law of cause and effect and dependent origination, as well as the idea that it is too simplistic a notion for today to be a result of yesterday as there are complicated ideas related to Buddhist ethics. ...read more.