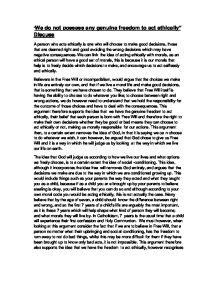 We do not possess any genuine freedom to act ethically Discuss

"We do not possess any genuine freedom to act ethically" Discuss A person who acts ethically is one who will choose to make good decisions, those that are deemed right and good avoiding the wrong decisions which may have negative consequences. We can link the idea of acting ethically with morals, as an ethical person will have a good set of morals, this is because it is our morals that help is to freely decide which decisions to make, and encourage us to act selflessly and ethically. Believers in the Free Will or incompatiblism, would argue that the choices we make in life are entirely our own, and that if we live a moral life and make good decisions, that is something that we have chosen to do. They believe that Free Will itself is having the ability to choose to do whatever you like; to choose between right and wrong actions, we do however need to understand that we hold the responsibility for the outcome of those choices and have to deal with the consequences. This argument therefore supports the idea that we have the genuine freedom to act ethically, their belief that each person is born with Free Will and therefore the right to make their own decisions whether they be good or bad means they can choose to act ethically or not, making us morally responsible for our actions. ...read more.

An alternative point of view is that of determinism. Whilst followers of Free Will believe that we are morally responsible for the actions that we carry out freely and deliberately, determinism holds the belief that there are laws of nature acting upon us, and it is these laws which govern everything which happens and that all out actions are a result of these laws. They believe that each of our actions and choices we make are determined by the situation immediately before it, and the one before that and so on. They believe that because of this, freedom of choice, freedom to act ethically is just an illusion, rendering personal responsibility a meaningless concept, along with the idea of blame and punishment. This however raises questions of guilt and why we still feel a sense of responsibility, for example if a man inevitably hit a girl who ran out in front of his car, whilst this is not his fault as it couldn't have been avoided, he will still feel responsible for the incident. This criticism is answered in different ways; the idea of hard and soft determinism. Firstly Hard determinism is the stricter of the two, it argues that all our actions had prior causes and that we are neither free nor responsible. It believes that we do not possess any free will at all and that it is in fact just an illusion; that if we are to commit a crime ...read more.

This argument also includes God, it believes that the force that determines your life is God and that from the moment you are born your life is planned out. However it believes that your life consists of major decisions, and for each of these decisions there is several choices, God knows all of these choices and the outcome of each one, however he doesn't know which choice we are going to make, and therefore we still have the ability to choose freely. In conclusion, there are many different idea concerning ethics and our ability to live ethically. Whilst it is possible as hard determinists would believe that freedom to choose is in fact an illusion and that the way in which we act has nothing to do with us, this argument seems cold and raises many questions about why we are alive in the first place, as well as raising problems with the idea of heaven and h**l, because if we are not judged for our actions why should people who have done bad go to heaven just because it was determined they would when they were born. It seems that it is more likely that free will does exist whether we have total free will and ability to do whatever we choose or whether it is in some ways restricted in that we have limited choices such as that in soft determinism, it appears as though out ability to choose between right and wrong is out choice, and there for our responsibility. ?? ?? ?? ?? ...read more.