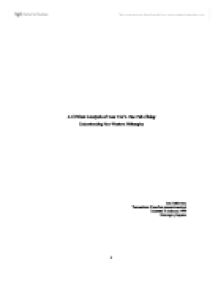 A Critical Analysis of Lao Tzu's Tao Teh Ching Understanding Non-Western Philosophy Joni M�kivirta Teoreettisen filosofian proseminaarity� Esitet��n 4 elokuuta 1999 Helsingin yliopisto Contents 1. Introduction 2 2. The Nature of Chinese Philosophy 4 3. The Argument of Tao Teh Ching Criticised 6 4. Conclusion 8 BIBLIOGRAPHY NOTES "It lies in the nature of Grand Virtue to follow the Tao and the Tao alone. Now what is the Tao? It is Something elusive and evasive ... And yet it contains within Itself a Substance. Shadowy and Dim! And yet It contains within Itself a Core of Vitality. The Core of Vitality is very real, It contains within Itself an unfailing Sincerity. Throughout the ages Its Name has been preserved. In order to recall the Beginning of all things. How do I know the ways of all things at the Beginning. By what is within me."1 1. Introduction In recent years there has been an increasing interest in non-western philosophy. The rigid position of regarding philosophy as a purely Western activity has been challenged partly because philosophers have come to realise the limits of Western rationalism and the impossibility of building wholly coherent logical systems.2 These consideration have led some philosophers like Feyerabend to conclude that all systems of knowledge are ultimately incommensurable; i.e understanding can only take place within a system of knowledge, and comparing different systems objectively is impossible.3 Another reason for the rise of World Philosophy has to do with the prevailing postmodern paradigm, according to which, there cannot not be more or less justified world views or knowledge claims, but all of them make sense only in the context of a certain discourse. This paper attempts to understand Chinese philosophy of Lao Tzu, the founder of Taoism, by analysing his book Tao Teh Ching (eng. The Treatise on the Way and its Power). This short book is written in an aphoristic and poetic style as a guide to good living and government. ...read more.

the style of philosophising in TTC and underline the point that tao is the how the world really is and a principle to follow. Another interesting idea related to tao is the idea of returning: anything that has gone far in one direction will inevitiably move in the opposite direction. Because of this "law of returning" humans should avoid overly striving after worldly goals, which inevitably leads to loss, and should instead be non-assertive and have few desires.14 It has already been pointed out that the sense of order in Chinese philosophy is different from that of the Western one. There is also a difference when it comes to a very important term "knowing". In Chinese philosophy knowing does not meant that there is a correspondence between mental ideas and external reality, as Westerners often understand the concept, rather knowing means "to penetrate", "to get throught without obstruction." In modern Chinese "I know" is chih tao which means "I know the way."15 After presenting some general features of Chinese thinking and the central concept of tao it is useful to elaborate some features of Taoism, for Lao Tzu's text TTC is regarded as one of its classic texts. Taoism is a religio-philosophical tradition that has, along with Confucianism, shaped Chinese life for more than 2,000 years. Taoism, like Confucianism, is relational rather than dualistic, and it advocates self-sufficiency by taking full advantage of the possibilities available in various relationships in the world. It suggests that the most productive relationships are inclusive and non-coercive. Hence, rather than separating gender into male and female and privileging one of them, it is better to be androgynous, also hard and soft is better than just hard, or sweet and sour is better than simply sweet. An area in which Taoism depart from classical Confucianism it its ecological sensibility, for it emphasises humans' relation to the natural order, as well as to the social and cultural environment. ...read more.

However, to my mind, TTC is not rational, for it does not give reasons to believe in tao, but instead appeals to fallacious argumentation. Neither is TTC critical for it presents itself as the way of thinking and living and consequently offers a dogmatic world view even if it leaves room for interpretation. As for being systematic, TTC could be regarded as a systematic philosophy because it does offer an all encompassing world view, but it does this at the cost of being vague and elusive. TTC seems to be lacking in philosophical qualities, and can only be read as philosophy if one is ready to ignore the elusive and poetic style, logical fallacies and dogmatism, and concentrates on the message as a whole. In the context of Chinese thought, TTC seems altogether different, for it did, as mentioned above, contribute and develop further the concepts and ideas of Chinese tradition, and it uses the familiar way of arguing. Thus, maybe it is regarded more to qualify as philosophy by the Chinese, even if for me, as a westerner, it does not open up that way. This leads us to a very important point about understanding non-western philosophy: in order to understand it we must, to some extent, give up on our criteria and apply the principle of charity when it comes to logic and the use of concepts. Only this way we can do justice to forms of thinking that could potentially make an important contribution to our way of thinking. The problem is, of course, where do we draw the line between charity and criticism, to what extent we must give up of our dearly cherished principles in order to do justice to other ways of thinking? When are we justified saying: "this is not philosophy." It is difficult to draw this line, but it is certain that without some charity, without willingness to listen and learn, one will find it very difficult to enter into a dialogue with non-western thinkers, especially when some of them, like Lao Tzu, regard that their main principles cannot be talked about. ...read more.