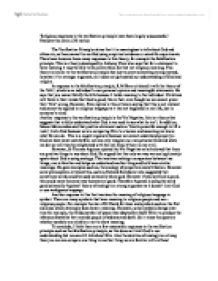 Religious responses to the verification principle have been largely unsuccessful. Evaluate this claim.

'Religious responses to the verification principle have been largely unsuccessful.' Evaluate this claim. (20 marks) The Verification Principle claims that it is meaningless to talk about God and ethics etc, as these cannot be verified using empirical evidence or scientific experiments. There have however been many responses to this theory, for example the falsification principle. This is a theory developed by Anthony Flew who says that for a statement to have meaning it must be able to be proven false. So that not religious meaning. This theory is similar to the verification principle but just to prove something wrong instead, however it's a stronger argument, as it does not go beyond our understanding of God and religion. ...read more.

In addition, Moses Maimonides said that positive statement such as 'God is powerful enough to lift a rock', limits God because we are comparing Him to a human and assuming we know what He can do. This is a cogent argument because we cannot understand properly a God we have never seen before, we can only imagine our own personal God and when we die we will then be enlightened with the real God, if there is one at all. However, St Thomas Aquinas rejected the Via Negativa as he believed that there are positive things to say about God. He argued that the only we way we can legitimately speak about God is using analogy. ...read more.

However, some symbols change over time for example, the Hindu symbol of peace was adapted by Adolf Hitler to produce the infamous Swastika that reminds people of sadness and death. So it raises the question whether symbols are reliable or not to show meaning. To conclude, I think there are a few reasonable responses to the verification principle such as the falsification principle, as this does not limit God to our understanding but we can still talk about Him. Also the doctrine of analogy is a strong theory as we can compare one thing to another thing we are familiar with without properly describing the unfamiliar thing and this makes it easier for us to understand. However, symbols can often be misinterpreted and lead to confusion, as they don't say enough about God and religion for people to fully understand. ...read more.