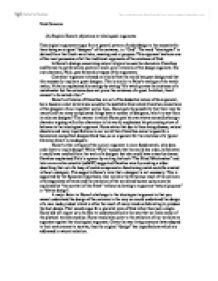 (A) Explain Hume's objections to teleological arguments Teleological arguments argue from a general pattern of order/design to the necessity for there being an original "designer" of the universe, i.e. "God". The word "teleological" is derived from the Greek word telos, meaning end or purpose. This argument has been one of the most persuasive of all the traditional arguments of the existence of God. In Hume's dialogs concerning natural religion he uses the characters Cleanthes and Demea to put forward a posteriori and a priori versions of the design argument. His own character, Philo, puts forward critiques of the arguments. Cleanthes' argument is based on a belief that the world has great design and that this necessarily implies a great designer. This is similar to Paley's analogy of the watch maker; Voltaire emphasised his analogy by stating "If a watch proves the existence of a watchmaker but the universe does not prove the existence of a great Architect, then I consent to be called a fool." Hume's criticisms of Cleanthes are not of the deductive nature of his argument, but a based on what he believes would be the dubitable God which Cleanthes would have of the designer of our imperfect world. Also, Hume puts the possibility that there may be many God's as many complicated things have a number of designers, who's to say there is only one designer? ...read more.

(B) "God is the most likely explanation for design in the universe". Discuss. In examining this question, the key phrase is "most likely". In exploring the existence of God we are drawn to look at what is "probable" or "most likely" rather than "what is". Many believers in God accept that there needs to be a leap of faith as without it religion is undermined as faith is the integral part of belief in a God. However, there is value, as Hume has shown, in exploring the likelihood of there being a benevolent God and arguments supporting His existence. For Christians, by far the most popular of all the traditional arguments for the existence of God is the argument from or to design - the teleological argument. There are two versions of the argument for believing in God due to design in the universe; one is that we can deduce the existence of God from instances of design (teleological) and the other is an argument from experience of a regulated and organised world to the conclusion that this must be the work of a designer (Providence). God is a probable or possible explanation for either version of the argument, but that does not make him necessarily exist. One of the criticisms of the teleological argument is that complexity does not imply design. ...read more.

Philosophers from Aristotle through to Dawkins have debated what this argument has to say about the problem of infinite regress - if the universe must be designed why should its designer not also be designed and so on? Thus it brings us back to the major problem of using the design argument to prove the existence of God because who designed the designer? Counter arguments have been that the designer does not have to be as complex as the objects he designs and that God contains within his essence the ability to design and order the universe and does not need a designer himself. What is persuasive about using the design argument to prove the likelihood of God's existence is that we generally interpret our world as being ordered and not completely chaotic. There is no compelling evidence from the design argument that God exists as the Christian God whose qualities are clearly taught through the Bible. However, if one is looking for God as a likely explanation of design in the universe the fact that the universe appears to not be randomly created does lead one to suppose that it must have been created by a powerful entity, however it would require a leap of faith to conclude that this entity it God. Those who argue against the teleological theories however do not in general provide a positive alternative as to how the universe began but rather focus on its faults. ?? ?? ?? ?? Nick Cameron ...read more.