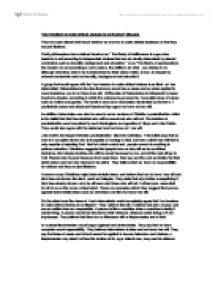 Our freedom to make ethical choices is an illusion Discuss

"Our freedom to make ethical choices is an illusion" Discuss There is much debate that about whether we are free to make ethical decisions or that they are just illusions. Firstly philosophers have defined freedom as "The liberty of indifference is a genuine freedom to act according to independent choices that are not wholly determined by eternal constraints such as heredity, background and education" or as "The liberty of spontaneity is the freedom to act according to one's nature, the ability to do what one wishes to do although what they wish to do is determined by their nature which, in turn, is shaped by external constraints such as heredity, background and education". A group that would agree with the "our freedom to make ethical choices is an illusion" are determinist. Determinism is the view that every event has a cause and so when applied to moral decisions; we do not have free will. All theories of Determinism is influenced by Isaac Newton's physics, according to which the universe is governed by immutable laws of nature such as motion and gravity. The world is seen as a mechanism dominated by the law of predictable cause and effect and therefore they agree we have no free will. In addition determinism can also be seen in some versions of Christian predestination which is the belief that God has decided who will be saved and who will not. The doctrine of predestination was formulated by such theologians as Augustine of Hippo and John Calvin. ...read more.

Therefore we in fact have freedom to make ethical choices. More modern versions of hard determinism point to our genetic heritage, social conditioning or subconscious influences as prior causes and therefore agree that we have no free will. An example of this is behaviourism. John Hospers gave the blueberry pie example, eg a man who eats a combination of foods eg a blueberry pie and that was the causation for murder. Psychological behaviourism was first discussed by John B Watson who suggested that behaviour can be predicted and controlled. By manipulating the environment people's behaviour can be altered. This idea is called conditioning and Ivan Pavlov, who conditioned dogs to salivate (dinner time) when they heard the sound of the bell. Operant conditioning is went we are not always conditioned by our environment but often use it to get what we want. Bf skinner claimed that behavioural science develops and psychologists learn to determine and control human behaviour. People cannot be blamed for their Moral behaviour if they had no freedom of choice and could of done nothing else. Bio behaviourism we can make a better person biologically, eg Muller - "make a person moral, eg through eugenics- "it is a genuine warmth of fellow feeling." All these ideas suggest that we have no freedom to make ethical choices and they are just illusions. Although Steven Pinker was a determinist, by looking at ideas of Darwin and Richard Dawkins such as emotions he developed a theory. ...read more.

We cannot know the future from contingent predictions. In conclusion, contingent truths may be fallible but libertarianists are justified in maintaining that our free-will is "beyond reasonable doubt." Finally soft determinism would have mixed reviews over "Our freedom to make ethical choices is an illusion". This is because Soft determinism says that some of our actions are determined but that we are morally responsible for actions. Soft determinists agree that all human actions are caused, since if they were not they would be unpredictable and random. Lastly Immanuel Kant, who believed that determinism applied to everything which was the object of knowledge, but not to acts of the will. Kant said we have pure and practical reason, pure is knowledge, the mind and practical is concern for actions, the will. Kant says freedom is a postulate of practical reason, he says that our own self awareness without, the world would not make sense to us, forces us the idea that we are free, so we cannot get rid of the idea we are free without seeing ourselves as the originator of our actions. In conclusion, although there is much debate from the hard determinists, libertarianists and soft determinists about is "Our freedom to make ethical choices is an illusion", I personally believe that the statement is wrong. I find that we do have freedom but I also think there is a cause and effect which may lead to influences in my choices but at the end of the day I am making my own choice and I feel we are free moral agents with the liberty to act and make ethical decisions using our own free will. ?? ?? ?? ?? ...read more.