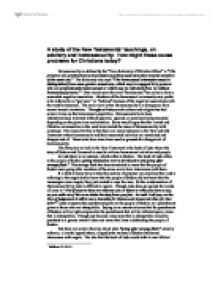 A study of the New Testaments&amp;#146; teachings, on adultery and homosexuality- How might these cause problems for Christians today?

A study of the New Testaments' teachings, on adultery and homosexuality- How might these cause problems for Christians today? Homosexuality as defined by the "New dictionary of Christian Ethics" is "The presence of a predominant and persistent psychosexual attraction towards members of the same s*x." The dictionary also says "The h********l orientation must be distinguished from same-gender s****l acts, which may be engaged in by persons who are predominately heterosexual or which may be refrained from by celibate h********l persons." Over recent years the term "h********l" has come to have a somewhat negative association. Members of the h********l community now prefer to be referred to as "gay men " or "lesbians" because of the negative associations with the word h********l. The main view is that Homosexuality is a divergence from normal s****l orientation. Throughout history each culture and religion has had several views on the h********l population. Homosexuals have been institutionalised, tolerated without approval, ignored, or penalised and persecuted depending on the given time and situation. Some would argue that the Jewish and Christian communities in the west have treated the issue of Homosexuality with contempt. The reason for this is that there are many instances in the New and Old Testament where homosexuals and their associated activities are mentioned and disapproved of. These texts have since been used as grounds for disapproval of homosexuality. The first place to look in the New Testament is the book of Jude where the story of Sodom and Gomorrah is used to criticise h********l activities and people. In Jude there is an instance, which refers to Sodom. The book of Jude refers to the people of Sodom giving themselves over to fornication and going after strange flesh." This strange flesh has been translated to mean that the people of Sodom were going after members of the same s*x to have intercourse with them. It is hard to know how to take this section of scripture we could say that Jude s referring to the angels but ...read more.

But this statement is also emphasising one of the other commandments "thou shalt not covert thy neighbours wife"13. In Deuteronomy on adultery and fornication it says, "If a man is caught sleeping with another man's wife both must die, the man who has slept with her and the woman herself. You must banish this evil from Israel."14 Jesus does not mention s****l relations other than adultery. Jesus emphasises the act of l**t as being just as bad as the act of adultery itself (Mathew 5:27) "But I say this to you if a man looks at a woman lustfully, he has already committed adultery with her in his heart" Jesus' again disregards the laws set in Deuteronomy in John 8:1-11. Here a woman is found in the act of committing adultery and is brought to the Temple Square to be stoned to death. The scribes and Pharisees were trying to test Jesus to see if he would obey the Jewish laws or ignore them. There was a very angry atmosphere around so Jesus took himself out of that atmosphere by bending down and writing in the sand. He did this to show that he was acting as a servant to the woman. This act alone shows that the act of adultery was not such a huge crime that God would reject the woman. When Jesus was asked by the Pharisees "...Moses has ordered us to condemn women like this to death by stoning. What have you to say?" Jesus used these words "If there is one of you that has not sinned let him be the one to throw the first stone at her"15. It is possible to say here that Jesus does not consider adultery to be a sin but this is wrong. Jesus in fact says later to the woman. "'Has anyone condemned you?' 'No one, Sir' she replied. 'Neither do I condemn you,' said Jesus 'Go away, and don't sin any more.'"16 On this James McPolin, S.J.17 said, "the acquittal of Jesus is authoritative, a free decision of one who is conscious of God's mercy towards sinners". ...read more.

The church in fact says, on the subject of homosexuals "They must be accepted with respect, compassion and sensitivity27". The Catholic Church sees adultery as "when two partners, of whom at least one is married to another party, have s****l relations - even transient ones - they commit adultery." 28 Christ even condemned the desire or l**t as being just as grave as adultery Mathew 5:27. And the sixth commandment condemns adultery outright. Adultery is commonplace in today's society the sacredness of marriage today is violated more and more. People's values have changed and in a way we have become self-centred and the attitude each man for himself, has been adopted. Where as before the marriage was the unity of two separate peoples with god to become one is no longer the same. In fact people now see marriage as a union between people where there is a security of a prenuptial agreement people actually expect for the marriage not to last. So why has marriage taken this sudden change is it because of more relaxed attitudes to relationships in general or is t to do with a new attitude about what one might be missing if one is tied down in marriage. Whatever the reason adultery is a failure to live up to the commitment made to each other and to Christ. In the Catechism of the Catholic Church this is summed up as "He who commits adultery fails in his commitment. He does injury to the sign of the covenant, which the marriage bond is, transgressing the other spouse and undermines the institution of marriage..."29 The spouse also has the children of his family to think of they rely on the security and safety of the family, and when adultery invades this sanctuary, it is the children who suffer the most. That is why the Catechism states "He compromises the good of human generation and the welfare of children who need their parents stable union."30 Surrounded by the modern values of today Christians have to be extremely strong and proud of their morals. ...read more.