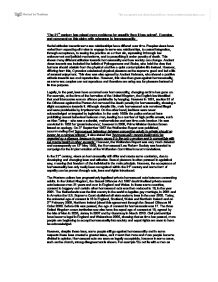 The 21st century has raised more problems for equality than it has solved. Examine and comment on this claim with reference to homosexuality.

'The 21st century has raised more problems for equality than it has solved'. Examine and comment on this claim with reference to homosexuality. Social attitudes towards same s*x relationships have differed over time. Peoples views have varied from expecting all males to engage in same-s*x relationships, to casual integration, through acceptance, to seeing the practice as a minor sin, repressing it through law enforcement and judicial mechanisms, and to proscribing it under penalty of death. This shows many different attitudes towards homosexuality and how society can change. Ancient views towards s*x included the beliefs of Pythagoreans and Stoics, who held the view that humans should abstain from the physical and live a quiet contemplative life instead. However, differing from this, Cyrenaics celebrated physical pleasure as the supreme good and led a life of sensual enjoyment. This view was also agreed by Ancient Hebrews, who shared a positive attitude towards s*x and reproduction. However, this view then goes against homosexuality, as same-s*x couples can not reproduce and therefore are using s*x for pleasure instead of its true purpose. Legally, in the past, laws have occurred over homosexuality, changing as time has gone on. For example, at the time of the formation of the United Kingdom, the English law identified that a**l intercourse was an offence punishable by hanging. However in 1861, section 61 of the Offences against the Person Act removed the death penalty for homosexuality, showing a slight acceptance towards it. Although despite this, male h********l acts remained illegal and were punishable by imprisonment. On the other hand, lesbians were never acknowledged or targeted by legislation. ...read more.

By our words, some will repent. By our words, some will be condemned. Whether they hear, or whether they forbear, they will know a prophet has been among them...our goal is to glorify God be declaring His whole counsel to everyone...we hope that by our preaching some will be saved'. The Westboro Baptist Church expresses the opinion that nearly every tragedy in the world is linked to homosexuality. It expresses the view that God hates homosexuals above all other types of sinners and that homosexuality should be criminalised and punishable by the death penalty. This hate group is still seen to be holding onto support, meaning that opposition to homosexuality is still increasing. This therefore agrees with the statement 'the 21st century has raised more problems for equality than it has solved', as strong division in beliefs is occurring, causing hatred to one another. Along with these religious views against homosexuality, the general society of today also shows dislike towards homosexuals. For example, a local issue against a h********l couple occurred in Cookham at the beginning of March 2010. The newspaper was titled 'Backlash after B&B turned away gay couple'. The article states 'A couple from Cookham who turned away a gay couple from their Bed and Breakfast say they have received threats of physical violence since the story broke in the national press'. This once again shows strong division in society, through peoples differing views. However, to ensure that the members of the public did not take up the view that everyone belonging to the Christian Church discriminated against homosexuals, the local vicar of Cookham offered his house as a place for the couple to stay. ...read more.

The natural law states that the natural s*x partner for a man is a woman and for a woman it is a man. The natural law then states the peoples opposing views of this and so supporting homosexuality are wrong, as h********l couples are unnatural. The natural purpose of s****l intercourse is for procreation, which once again if you are in a h********l relationship this cannot happen, and so goes against nature and the natural law, resulting in homosexuality being viewed as wrong. Overall, when referring to the statement 'The 21st century has raised more problems for equality than it has solved', from investigating the different views of society and the Church, I agree with this statement. Discrimination of homosexuals is a constant occurrence and in some cases, such as the nail bombings in central London, a serious case. Great division has been caused among the Church, due to homosexuality, and so strong dislike begins to show. The Westboro Baptist Church is a key example of this, as it clearly expresses its hatred towards homosexuals. Those brought up in a very religious environment are also likely to disagree with homosexuality, as it goes against biblical teachings and is unnatural. Those very religious may not necessarily have a very open mind and therefore are unable to see outside what they have been taught. This could partly be why division occurs, as people are unwilling to accept other members views within society. So, due to contrasting beliefs and different laws passed, the statement is easy to agree with, as hate groups introduced, such as www.godhatesfags.com have been caused from homosexuality issues. All these factors can therefore be taken into account to agree with the fact that the 21st century has indeed created more problems than it has solved. ...read more.