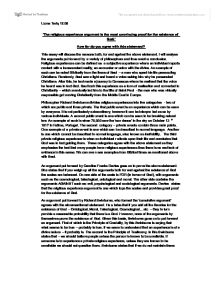 The religious experience argument is the most convincing proof for the existence of God. How far do you agree with this statement?

'The religious experience argument is the most convincing proof for the existence of God.' How far do you agree with this statement? This essay will discuss the reasons both, for and against the above statement. I will analyse the arguments put forward by a variety of philosophers and thus reach a conclusion. Religious experiences can be defined as a subjective experience where an individual reports contact with a transcendent reality, an encounter or union with the divine. An example of such can be noted Biblically from the times of Saul - a man who spent his life persecuting Christians. Randomly, Saul saw a light and heard a voice asking him why he persecuted Christians. After this, he had made a journey to Damascus where he realised that the voice he heard was in fact God. Saul took this experience as a form of realisation and converted to Christianity - which eventually led him to the title of Saint Paul - the man who was virtually responsible got moving Christianity from the Middle East to Europe. Philosopher Richard Swinburne divides religious experiences into five categories - two of which are public and three private. The first public event is an experience which can be seen by everyone. ...read more.

Thus, the conclusion follows probably from the premises and inferences. Thus both agree with the statement. However, there are also arguments against the statement and thus religious experiences. There are three main types of criticism. These can be categorised into description, object and subject related. Description related challenges discuss claims the experience something when the description is self contradictory or inconsistent. Such challenges can be defeated by showing that there is no real contradiction or inconsistency - the idea of God does not include any contradiction. Subject related challenges discusses experimental claims because the person claiming the experience is unreliable or, for instance, has not had the proper training to correctly evaluate the experience. Davies maintains, however, that in the case of religious experiences a very simple person may have as profound an experience as a more sophisticated one. Further, even much religious training or guidance by a spiritual master does not grantee that a religious experience will result. Object related challenges state that if, on the basis of background evidence, it is highly unlikely that the thing claims is to be experienced was present. Then the claim might be dismissed. The Loch Ness monster might fall into this category. ...read more.

This argument can be used as proof for God as religious experiences occur without 'conditioning' - without any prior thinking about God. However, the anti realists approach by Nicholas Lash states that the chain of events does not start at a religious experience. Instead, we think of God and then read Holy books, we go on to learn doctrines and then in turn have religious experiences. This argument, however, does not prove the existence of God. It is indoctrinated within a religion - meaning we have to think about God first. In conclusion, I believe that the argument will fail to convince and atheist, unless they themselves experience it. It is hard to understand and empathise with an idea you disagree with when there is no real proof. A.E Taylor states that: 'As an artist is trained to see art everywhere - a religious person is trained to see God everywhere.' By this Taylor is stating that it will take a religious person to understand a religious experience - whereas, if an atheist was faced with the same situation - they would easily come to other conclusions. Therefore, I conclude that religious experiences may strengthen the faith of believers - especially those who have experienced one - However, they will fail to convince an atheist due to their many alternative explanations. ?? ?? ?? ?? Uzma Tariq 12.06 ...read more.