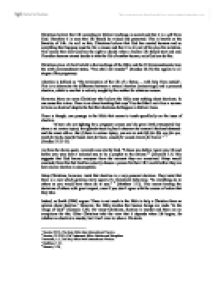 Christians believe that life according to biblical teachings is sacred and that it is a gift from God. Therefore it is seen that life should be valued and preserved. This is known as the Sanctity of Life. As well as this, Christians believe that God has created humans and so everything that happens must be for a reason and that it is all part of his plan for salvation. This means that only God has the right to decide when a human life should start and end. Therefore humans cannot decide to take the life of another human, only God can do this. Christians place all their beliefs in the teachings of the Bible and the 10 Commandments, here the sixth commandment states, "You shall not murder"1 (Exodus 20.13) this applies to all stages of the pregnancy. Abortion is defined as 'The termination of the life of a foetus.... with help from outside'. This is to determine the difference between a natural abortion (miscarriage) and a procured abortion, which is one that is actively sought by the mother for whatever reason. However, there are some Christians who believe the Bible says nothing about abortions. In one sense this is true. There is no direct teaching that says 'You shall/shall not allow a woman to have an abortion' despite the fact that abortions did happen in biblical times. There is though, one passage in the Bible that seems to touch specifically on the issue of abortion: "If men who are fighting hit a pregnant woman and she gives birth prematurely but there is no serious injury, the offender must be fined whatever the woman's husband demands and the court allows. ...read more.

Would women, who are in this position, find it plausible to 'give up' there child for adoption? Would it not be better and more compassionate, causing less emotional damage to the mother, to allow her to have an abortion before a 'maternal bond' has developed. Furthermore, in some Catholic counties, such as Ireland, where abortion is illegal, this can lead to more pain and suffering. In Ireland there are, according to the Guardian (23rd September, 1996) over 30,000 women who come to the U.K each year to have an abortion.14 Moreover, by banning abortions this can lead to an increase in 'Back Street Abortions.' This is where abortions are carried out in unclean and unsafe medical conditions. Thus increasing the pain and suffering, so are the Catholic teachings practical, realistic and safe? The Protestant Church is reluctant to take such a hard line as Catholics do in the abortion debate. It accepts that there are certain situations when abortion is an unavoidable consequence of deciding between the 'lesser of two evils' (E.G., Accepting that a woman who becomes pregnant after being raped might want an abortion). Thus they generally advocate a form of Situation Ethics. The Methodist Conference, 1976, declared that abortion is always an evil. However, single mothers should always be supported and encouraged to have their baby adopted if they choose not to keep it. The church recognizes that there are cases where abortion is the lesser of two evils: where the foetus is severely handicapped, the pregnancy is a result of r**e or the health, either mentally or physically, of the mother is at risk. ...read more.