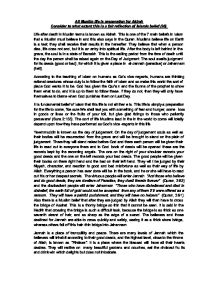 Life after death in Muslim terms is known as Akirah. This is one of the 7 main beliefs in Islam that a Muslim must believe in and this also says in the Quran. Muslims believe life on Earth is a test; they shall receive their results in the hereafter. They believe that when a person dies, life does not end, but it is an entry into spiritual life. After the body is left behind in the grave, the soul is in a state of Barzakh. This is the waiting period from the time of death until the day the person shall be raised again on the Day of Judgment. The soul awaits judgment for its deeds (good or bad), for which it is given a place in al-Jannah (paradise) or Jahannam (hell).

According to the teaching of Islam on humans as Go’s vice-regents, humans are thinking rational creatures whose duty is to follow the faith of Islam and so make this world the sort of place God wants it to be. God has given the Qur’an and the Sunna of the prophet to show them what to do, and it is up to them to follow these. If they do not, then they will only have themselves to blame when God punishes them on Last Day.

It is fundamental belief of Islam that this life is not all there is. This life is simply a preparation for the life to come, ‘Be sure We shall test you with something of fear and hunger, some loss in goods or lives or the fruits of your toil, but give glad tidings to those who patiently persevere’ (Sura 2:155). The sort of life Muslims lead in the in the world to come will totally depend upon how they have performed as God’s vice-regents in this life.

Yawmmuddin is known as the day of judgement. On the day of judgement souls as well as their bodies will be resurrected from the grave and will be brought to stand on the plain of judgement. There they will stand naked before God and there each person will be given their life to read out to everyone there and to God book of deeds will be opened these are the records kept by the recording angels. The one on the right of your shoulder records your good deeds and the one on the left records your bad deeds. The good people will be given their books on there right hand and the bad on their left hand. They will be judged by their Niyyah, character, and reaction to good and bad misfortune as well as their way of life by Allah. Everything a person has ever done will be in the book, and he or she will have to read out his or her deepest secrets. The virtuous people will enter Jannah “And those who believe and do good deeds, they are dwellers of Paradise, they dwell therein forever” (Quran, 2:82) and the disobedient people will enter Jahannam “Those who have disbelieved and died in disbelief, the earth full of gold would not be accepted from any of them if it were offered as a ransom.  They will have a painful punishment, and they will have no helpers” (Quran, 3:91). Also there is a Muslim belief that after they are judged by Allah they will then have to cross the bridge of Assirat. This is a thorny bridge so thin that it cannot be seen. It is said in the Hadith that crossing the bridge is such a difficult task, because the bridge is as thick as one seventh strand of hair, and as sharp as the edge of a sword. The believers and those destined for Jannah are able to cross quickly and safely, seeing it as a thick stone bridge, whereas others fall off this hair-thin bridge into Jahannam.

Jannah is a place of tranquillity and peace. There are many levels of Jannah which the believers will inhabit according to their good deeds, and the highest level, close to the throne of Allah, is known as "Firdaws". It is a place where the blessed will have all their hearts desires. They will recline on  many beautiful gardens and couches, eat the choicest fruits and drink win which delights but does not intoxicate.

Jahannam is the punishment for unbelievers. There are many levels of hell according to the different types of evil deeds committed by disbelievers. The Qur'an describes hell to be a place for burning and purging sins. The fire is so hot that people’s skins will be replaced again and again to make them feel the punishment. In the depths of hell, a tree called Zaqqum grows which has fruit resembling the heads of devils; this is a very thorny and bitter fruit that will get stuck in the throats of the inhabitants of hell.

One argument for this statement is that Muslims believe this life is a test so why not follow the straight path of Allah and be patient and wait until the next eternal life with Allah. Everything in this life you do will be recorded and weighed on a scale and has consequences in the next, so if you live a pleasurable life in this life and a sinful life too then you will be punished in the next. However an argument against is that we should thank God for this life and his creation and that we were here for a purpose. Mainly Muslims will hold the idea that Muslim life is about Ibadah and thanking Allah. Muslims teachings say that Muslims are Kalifahs which are vice regents or stewards that should look after Allah’s creation and care for the universe as he has created it and it is our duty. Muslims follow the prophets Sunnah in order to live a good way of life. In the Quran there is little about Akirah, however the main teaching of it is that this life is a test and you will need to be good in this life in order to become close to Allah in the next.